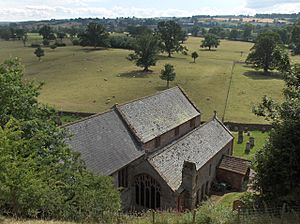 Kirkoswald is a village, civil parish, and former market town located in the Lower Eden Valley of Cumbria, England, formerly in Cumberland, about 9 miles (14 km) from Penrith. The village, referred to colloquially as KO, had a population of 870 at the 2001 census, which rose to 901 at the 2011 Census.

All content from Kiddle encyclopedia articles (including the article images and facts) can be freely used under Attribution-ShareAlike license, unless stated otherwise. Cite this article:
Kirkoswald, Cumbria Facts for Kids. Kiddle Encyclopedia.