Kids Encyclopedia Facts
Not to be confused with Peel Island, Cumbria.

Piel Island lies half a mile (1 km) off the southern tip of the Furness peninsula in the administrative county of Cumbria, England, though historically within Lancashire, north of the sands. It is located at OS grid ref. SD233637. It is one of the Islands of Furness. It is the location of Piel Castle.

The island is within the administrative boundaries of the mainland town of Barrow-in-Furness and is owned by the people of the town, having been given by the Duke of Buccleuch in the early 20th century. The Borough Council's administrative duties also include the selection of the "King" of Piel, who is the landlord of the island's public house, the Ship Inn. The area of Piel is about 50 acres (20 hectares). As well as the landlord and his family the island has three other permanent residents who live in the old Pilots Cottages. 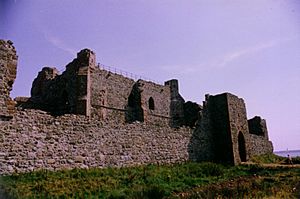 In the Middle Ages Piel was known as Fowdray (or Fouldrey or Fowdrey) island. This name would seem to be derived from the Old Norse words fouder, meaning "fodder", and ay or oy, meaning "island". The island's known history dates from the time of King Stephen who, in 1127, gave the island to the Savignac monks as part of a land grant for an abbey. When the Savignacs became part of the Cistercian order later in the 12th century, the island came under the control of the Cistercians at nearby Furness Abbey. In the early 13th century the Cistercians used Piel as a safe harbour and built a warehouse for the storage of grain, wine and wool. Some of these commodities were shipped over from Ireland. In 1212 the monks were granted a licence by King John to land one cargo of "wheat, flour and other provisions" to stave off a famine caused by the failure of the local harvest. Later in the century an unlimited cargo licence was granted and in 1258 ships owned by the abbey were placed under royal protection.

The monks fortified the island, firstly with a wooden tower surrounded by a ditch with palisades, and then in 1327 they commenced the building of a motte and bailey fort (also known as a "peel" - hence the island's modern name). This structure was, at the time, the largest of its kind in northwest England. It was probably built as a fortified warehouse to repel pirates and raiders, but it would appear to have had a measure of success in keeping the customs men at bay as well; smuggling was widespread at the time and the abbey was known to have been involved. Indeed, in 1423 an accusation was made against the Abbott of Furness that he smuggled wool out of the country from "la Peele de Foddray". The red sandstone ruins of the fort came to be known as the "Pile of Fouldrey", and are known today as Piel Castle. 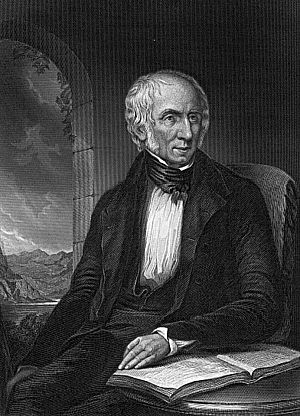 Romanticist William Wordsworth, who wrote of the island in a poem about his time at Rampside

The next noteworthy episode in the island's history occurred on 4 June 1487 when Lambert Simnel and his supporters arrived from Dublin. Simnel, crowned as "Edward VI" in Ireland, was being passed off as Edward, 17th Earl of Warwick, the Yorkist heir, by John de la Pole, Earl of Lincoln in his attempt to regain the throne for the Yorkists. Simnel and 2,000 German mercenaries made their way via Piel to do battle for the throne. They were eventually defeated at the Battle of Stoke near Newark-on-Trent in Nottinghamshire on 16 June 1487.

Following the Dissolution of the Monasteries in 1537 Piel Island and its castle became the property of the king. The castle's fortifications were strengthened at the time of the Spanish Armada but from then until the Civil War nothing of note happened on the island. The area of Furness was a Parliamentarian stronghold during the Civil War. For this reason the Parliamentarian fleet retreated to Piel Harbour when the Royalists captured Liverpool.

In 1662, following the restoration of Charles II, the lordship of Furness was given to the Duke of Albemarle and this included the castle and parts of the island. After this date activity on Piel seems to have revolved around shipping and industry. A salt works is recorded as existing on the island from as early as 1662, which was still apparently present in the 1690s.

Piel Island became an important trading post during the 18th century and customs men were permanently stationed there; smuggling was still rife at the time. In the second half of the 18th century the iron ore trade began to develop on the Furness Peninsula and the harbour continued to be important to the local economy. As the volume of shipping increased "His Majesty's boatmen" were stationed on Piel as harbour pilots and customs inspectors. Their cottages still stand, now used as summer residences by sailors.

In formal terms, it was a creek (outstation) of the port of Lancaster, and known as Piel Foudray.

In the 19th century the island was the subject of a poem by romanticist William Wordsworth.

Piel Island eventually fell under the ownership of the Duke of Buccleuch. He donated it to the people of Barrow-in-Furness in 1920 as a World War I memorial. 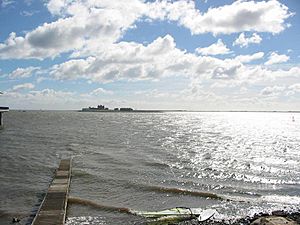 Being separated from neighbouring Roa Island by the Piel Channel, the island is accessible via a ferryboat from Roa Island pier during summer weekends. Piel can be reached from Walney Island but is only passable with care at low tide. Piel Castle is managed by English Heritage and there is free, unlimited access. The castle, located on the southeast tip of Piel Island, is an impressive ruin made up largely of stones from the beach. The three-storey keep affords good views of the island although it is no longer accessible to visitors. Campers may pitch a tent in its shadows.

The island is a haven for wildlife with many different species of sea bird to be found. Visitors should take care not to disturb nesting birds while walking on the beach. A marsh pond in the centre of the island now attracts many other types of bird.

The Ship Inn dates from the late 18th century. Today it provides sustenance for sailors, fishermen and day-trippers to the island. The landlord is known as 'The King of Piel', a title originating from the time of Lambert Simnel and his attempt to usurp the English throne. A tradition associated with the pub is known as the 'Knighthood of Piel'. Local fishermen have handed this down over the centuries. In a room of the inn is a large oak chair and anyone who sits in it is made a 'Knight of Piel'. The ceremonial knighting is carried out by the King of Piel or a fellow knight. The present-day cost of becoming a knight is to buy a round of drinks for all those present. However, the privilege afforded to knights is that they may demand food and lodging off the innkeeper should they be shipwrecked on Piel.

The pub's licence ended in November 2005 and Rod Scarr, who had been King of Piel for 20 years, left the island in April 2006. The island thus fell under the control of Barrow Borough Council. The opportunity was taken to fully renovate the pub, though work did not begin until July 2008, shortly before the new 'King of Piel', Steve Chattaway, was crowned (an event that was documented in the TV series Islands of Britain).

The origins of the Ship Inn are obscure; it is said to be over 300 years old, but the evidence is uncertain. In 1746 a lease for agricultural land situated within the castle ditch was granted to an Edward Postlethwaite, who is described as an innkeeper from the ‘Pile of Fowdrey’. The earliest direct reference to an inn, or ‘publick house’, is only in 1800. In 1813 a visitor painted a vivid picture of the life of the innkeeper at that time:

"There is a public-house on the island, the only habitation, tenanted by an old Scotchman, who has been lord of this domain for many years, and goes through the duties of guide and expositor among the ruins of the castle with admirable fluency.
The custom of the seamen from the roadstead, and the donations of occasional visitors in the summer time, support him in a state of which he has no right, he thinks, to complain; but he acknowledged that when there were no vessels in the roadstead he found his situation rather too lonesome, and apt to drive him to his beer-barrel for company."

The earliest map reference, in 1833, refers to the inn as 'The Herdhouse', and the first person who can confidently be identified as a landlord of the Ship Inn is James Hool as he is listed in the 1841 census as a publican.

All content from Kiddle encyclopedia articles (including the article images and facts) can be freely used under Attribution-ShareAlike license, unless stated otherwise. Cite this article:
Piel Island Facts for Kids. Kiddle Encyclopedia.