Kids Encyclopedia Facts
For a former name of a genus of larks, see Galerida.

Calendula is a genus of about 15–20 species of annual and perennial herbaceous plants in the daisy family Asteraceae that are often known as marigolds. They are native to southwestern Asia, western Europe, Macaronesia, and the Mediterranean. Other plants are also known as marigolds, such as corn marigold, desert marigold, marsh marigold, and plants of the genus Tagetes.

Calendula is one of the two birth flowers for the month of October, the other being Cosmos.

Calendula was not a major medicinal herb but it was used in historic times for headaches, red eye, fever and toothaches. As late as the 17th century Nicholas Culpeper claimed Calendula benefited the heart, but it wasn't considered an especially efficacious medicine.

In historic times Calendula was more often used for magical purposes than medicinal ones. One 16th-century potion containing Calendula claimed to reveal fairies. An unmarried woman with two suitors would take a blend of powdered Calendula, marjoram, wormwood and thyme simmered in honey and white wine used as an ointment in a ritual to reveal her true match.

Romans and Greeks used the golden Calendula in many rituals and ceremonies, sometimes wearing crowns or garlands made from the flowers. One of its nicknames is "Mary's Gold," referring to the flowers' use in early Catholic events in some countries. Calendula flowers are sacred flowers in India and have been used to decorate the statues of Hindu deities since early times.

However, the most common use in historic times was culinary, and the plant was used for both its color and its flavor. They were used for dumplings, wine, oatmeal and puddings. In English cuisine Calendula were often cooked in the same pot with spinach, or used to flavor stewed birds. According to sixteenth-century Englishman John Gerard, every proper soup of Dutch cuisine in his era would include Calendula petals.

The petals are edible and can be used fresh in salads or dried and used to color cheese or as a substitute for saffron. It can be used to add color to soups, stews, poultry dishes, custards and liquors.

The common name for Calendula officinalis in Britain is 'pot-marigold,' named so because of its use in broths and soups.

Dye can be extracted from the flower and produce shades of honey, gold oranges, light browns, and vibrant yellows.

Calendula officinalis oil is still used medicinally is use as an anti-inflammatory and a remedy for healing wounds. Calendula ointments are skin products available for use on minor cuts, burns, and skin irritation; however, evidence of their effectiveness is weak.

Calendula has been used traditionally for abdominal cramps and constipation. In experiments with rabbit jejunum, the aqueous-ethanol extract of C. officinalis flowers was shown to have both spasmolytic and spasmogenic effects, thus providing a scientific rationale for this traditional use. An aqueous extract of C. officinalis obtained by a novel extraction method has demonstrated antitumor (cytotoxic) activity and immunomodulatory properties (lymphocyte activation) in vitro, as well as antitumor activity in mice.

Calendula plants are known to cause allergic reactions, and should be avoided during pregnancy. 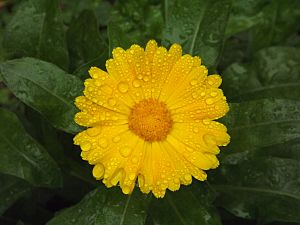 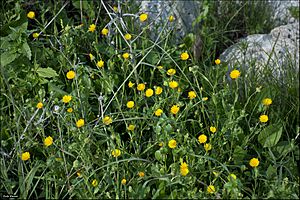 Group of flowers of Calendula arvensis.

All content from Kiddle encyclopedia articles (including the article images and facts) can be freely used under Attribution-ShareAlike license, unless stated otherwise. Cite this article:
Calendula Facts for Kids. Kiddle Encyclopedia.