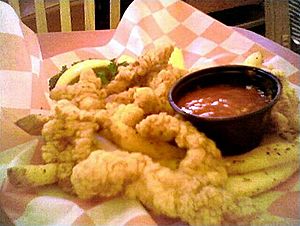 Deep fried alligator tail at a restaurant in Texas 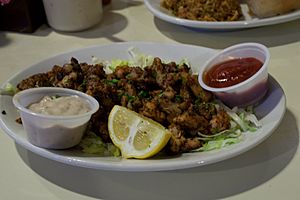 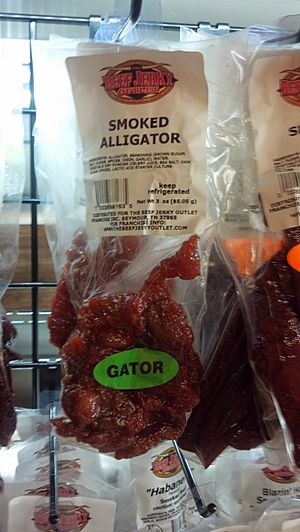 Alligator meat is the meat from alligators that is for consumption. It has been used both historically and in contemporary times in various cuisines of the Southern United States. Alligator eggs are also for consumption. Alligator meat has been described as a healthy meat source for humans due to its high protein and low fat composition. It has been described as being mild flavored and firm in texture.

In the United States, outside of a short legal hunting season in some states, it can only be legally sourced from alligator farms, and is available for consumer purchase in specialty food stores, some grocery stores, and can also be mail ordered. Some U.S. companies process and market alligator meat derived only from the tail of alligators. It can also be made into pet food.

Alligator meat has been described as having a mild flavor and a firm texture. It tastes like quail, with a mildly fishy flavor, and is often chewy, depending on preparation.

Various methods of preparation and cooking exist, including tenderization, marination, deep frying, stewing, roasting, smoking and sauteeing. Alligator meat is used in dishes such as gumbo, and is used in traditional Louisiana Creole cuisine. 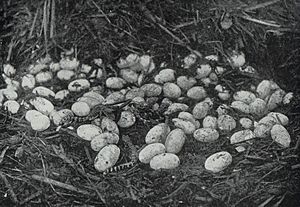 In the mid-1800s, alligator meat was used in some regional cuisines in parts of the Southern United States. During this time, it was used in dishes such as gumbo.

Alligator eggs were a part of the cuisine in many areas of the Southern United States in the early 1900s. During this time people would harvest the eggs and then sell them as a source of income.

In the United States, alligator hunting is legal in Arkansas, South Carolina, Louisiana, Florida, Georgia, and Texas. Additionally, the meat can be sourced from alligator farms.

All content from Kiddle encyclopedia articles (including the article images and facts) can be freely used under Attribution-ShareAlike license, unless stated otherwise. Cite this article:
Alligator meat Facts for Kids. Kiddle Encyclopedia.