Kids Encyclopedia Facts
This page is about the sausage. For other uses, see Boudin (disambiguation). 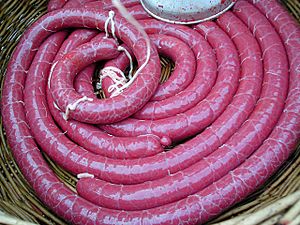 The Anglo-Norman word boudin meant 'sausage', 'blood sausage' or 'entrails' in general. Its origin is unclear. It has been traced both to Romance and to Germanic roots, but there is not good evidence for either (cf. boudin. The English word "pudding" probably comes from boudin.

Boudin gave rise to "Le Boudin", the official march of the French Foreign Legion. "Blood sausage" is a colloquial reference to the gear (rolled up in a red blanket) that used to top the backpacks of Legionnaires. The song makes repeated reference to the fact that the Belgians do not get any "blood sausage", since the king of the Belgians at one time forbade his subjects from joining the Legion (the verse says "ce sont des tireurs au cul").wa:Tripe (amagnî)

All content from Kiddle encyclopedia articles (including the article images and facts) can be freely used under Attribution-ShareAlike license, unless stated otherwise. Cite this article:
Boudin Facts for Kids. Kiddle Encyclopedia.