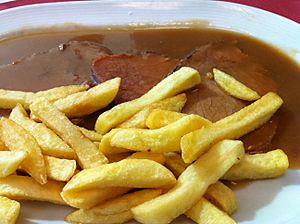 Espagnole sauce is a basic brown sauce, and is one of Auguste Escoffier's five mother sauces of classic French cooking. Escoffier popularized the recipe, which is still followed today.

Espagnole has a strong taste, and is rarely used directly on food. As a mother sauce, it serves as the starting point for many derivatives, such as sauce africaine, sauce bigarade, sauce bourguignonne, sauce aux champignons, sauce charcutière, sauce chasseur, sauce chevreuil, and demi-glace. Hundreds of other derivatives are in the classical French repertoire.

Escoffier included a recipe for a Lenten espagnole sauce, using fish stock and mushrooms, in Le Guide culinaire, but doubted its necessity.

All content from Kiddle encyclopedia articles (including the article images and facts) can be freely used under Attribution-ShareAlike license, unless stated otherwise. Cite this article:
Espagnole sauce Facts for Kids. Kiddle Encyclopedia.