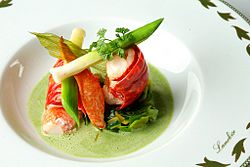 A example of nouvelle cuisine presentation 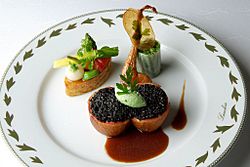 Nouvelle cuisine (French, "new cuisine") is an approach to cooking and food presentation in French cuisine. In contrast to the older haute cuisine, nouvelle cuisine has lighter, more delicate dishes, and pretty presentation. It started in Paris in the 1970s, and by the 1980s was seen in London and New York. The movement is now almost worldwide.

The reasons are connected with modern business life, where long two-hour lunches are a thing of the past. Also, customers began to look for lighter food menus. Food critics Henri Gault and his colleagues André Gayot and Christian Millau put out a new restaurant guide, the Gault-Millau, or Le Nouveau Guide.

Gault and Millau listed ten characteristics of this new style of cooking. They were: 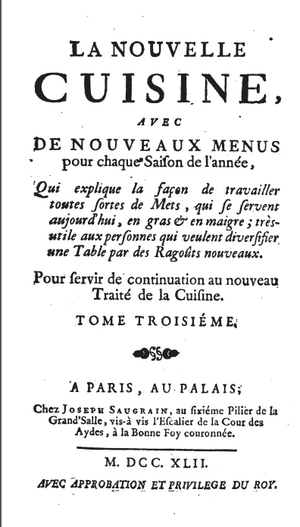 However, the term "nouvelle cuisine" has been used several times in the history of French cuisine.

In the 1730s and 1740s, several French writers emphasized their break with tradition. They called their cooking "modern" or "new". In 1742 Menon introduced the term nouvelle cuisine as the title of the third volume of his Nouveau traité. François Marin worked in the same tradition.

In the 1880s and 1890s, the cooking of Georges Auguste Escoffier was sometimes described as nouvelle cuisine. 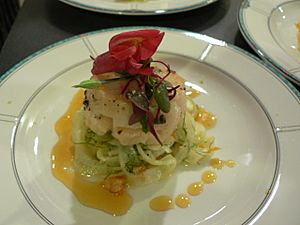 All content from Kiddle encyclopedia articles (including the article images and facts) can be freely used under Attribution-ShareAlike license, unless stated otherwise. Cite this article:
Nouvelle cuisine Facts for Kids. Kiddle Encyclopedia.