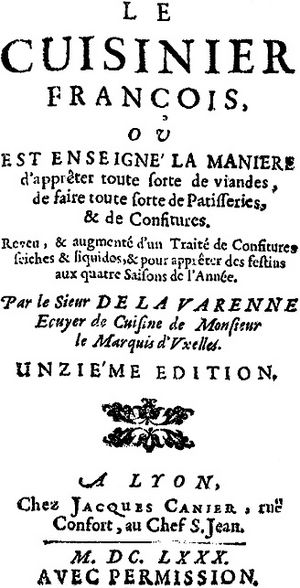 La Varenne, in the 17th century, broke with the Italian traditions that had revolutionized mediaeval French cookery in the 16th century. La Varenne wrote for professional chefs, and codified French cuisine for the age of Louis XIV.

The seventeenth century saw French cooking come into the modern era. The heavily spiced flavours of the Middle Ages were abandoned in favour of the natural flavours of French foods. Exotic spices (saffron, cinnamon, cumin, ginger, nutmeg, cardamom, nigella, seeds of paradise) were, with the exception of pepper, replaced by local herbs (parsley, thyme, bayleaf, chervil, sage, tarragon). New vegetables like cauliflower, asparagus, peas, cucumber and artichoke were introduced. Special care was given to the cooking of meat in order to conserve maximum flavour. Vegetables had to be fresh and tender. Fish, with the improvement of transportation, had to be impeccably fresh. Preparation had to respect the taste and visual look of the ingredients instead of masking them as had been done before.

La Varenne introduced the first bisque and Béchamel sauce. He replaced crumbled bread with roux as the base for sauces, and lard with butter. Here one finds the first use of the terms bouquet garni, fonds de cuisine (stocks) and reductions, and the use of egg-whites for clarification. It also has the earliest recipe in print for mille-feuille. The cooking of vegetables is discussed, a novelty. In a fragrant sauce for asparagus there is evidence of an early form of hollandaise sauce:

make a sauce with good fresh butter, a little vinegar, salt, and nutmeg, and an egg yolk to bind the sauce; take care that it doesn't curdle...

La Varenne had earlier (1650) written a book on confitures—jams, jellies and preserves. That included recipes for syrups, compotes and a great variety of fruit drinks, as well as a section on salads.

La Varenne wrote a third book, Le Pâtissier françois (Paris 1653), which was the first comprehensive French work on pastry-making. In 1662 was the first of the combined editions that presented all three works together. All the early editions of La Varenne's works—Le Cuisinier françois ran through some thirty editions in seventy-five years—are extremely rare; like children's books, they too were worn to pieces, in the kitchen, and simply used up.

Pirated editions of Le Cuisinier françois were printed in Amsterdam (1653) and The Hague (1654-56). Soon there were imitators: Le cuisinier françois méthodique was published anonymously in Paris, 1660. The English translation, The French Cook (London 1653) was the first French cookbook translated into English. It introduced professional terms like à la mode, au bleu (very rare), and au naturel which are now standard culinary expressions. Its success can be gauged from the fact that over 250,000 copies were printed in about 250 editions and it remained in print until 1815.

La Varenne had ten years' experience as chef de cuisine to the Marquis d'Uxelles, to whom he dedicated his publications and whom he immortalized in duxelles, finely-minced mushrooms seasoned with herbs and shallots, which is still a favourite flavouring for fish and vegetables.

Le Cuisinier françois was reprinted in 1983, published by Editions Montalba with a comprehensive introductory essay.

All content from Kiddle encyclopedia articles (including the article images and facts) can be freely used under Attribution-ShareAlike license, unless stated otherwise. Cite this article:
François Pierre La Varenne Facts for Kids. Kiddle Encyclopedia.