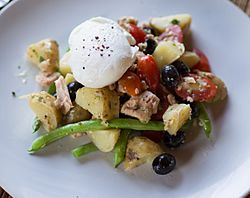 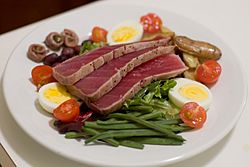 Salade niçoise is a salad from the district of Nice. It has tomatoes, tuna, hard-boiled eggs, olives, and anchovies. It is dressed with a vinaigrette. It is served with or without a bed of lettuce. The tuna may be cooked or canned.

The salad may include raw red peppers, shallots, artichoke hearts and other seasonal raw vegetables. It does not have cooked vegetables (like green beans and potatoes) which are often served in variations of salade niçoise around the world.

In French cuisine, raw vegetables served as appetisers are known as crudités.

All content from Kiddle encyclopedia articles (including the article images and facts) can be freely used under Attribution-ShareAlike license, unless stated otherwise. Cite this article:
Salade niçoise Facts for Kids. Kiddle Encyclopedia.