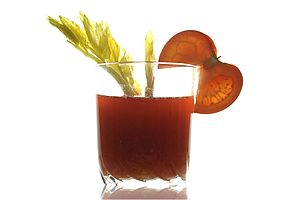 Tomato juice in a glass, decorated with tomato slice and sprig

Tomato juice is a juice made from tomatoes, usually used as a beverage, either plain or in cocktails such as a Bloody Mary, a Caesar, or Michelada.

Tomato juice was first served as a beverage in 1917 by Louis Perrin at the French Lick Springs Hotel in southern Indiana, when he ran out of orange juice and needed a quick substitute. His combination of squeezed tomatoes, sugar and his special sauce became an instant success as Chicago businessmen spread the word about the tomato juice cocktail.

Many commercial manufacturers of tomato juice also add salt. Other ingredients are also often added, such as onion powder, garlic powder, and other spices. In the United States, mass-produced tomato juice began to be marketed in the mid 1920s, and became a popular breakfast drink a few years thereafter.

In the United States, most tomato juice is made from tomato paste. In Canada, tomato juice is unconcentrated and pasteurized, made from fine tomato pulp from ripe and whole tomatoes. The stems and skins must be removed without adding water to the final juice product. It may also contain a sweetening agent, citric acid and salt. 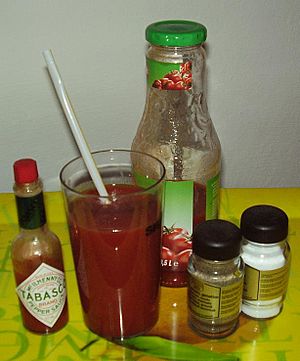 Tomato juice with other ingredients found in Bloody Mary mix

Chilled tomato juice was formerly popular as an appetizer at restaurants in the United States.

Tomato juice is frequently used as a packing liquid for canned tomatoes, though it is sometimes replaced by tomato purée for international commerce due to tariff issues on vegetables vs. sauces. According to Cook's Illustrated magazine, tomatoes packed in juice as opposed to purée tend to win taste tests, being perceived as fresher tasting.

Tomato juice is used in the preparation of tomato juice agar, used to culture various species of Lactobacillus.

Tomato juice is a popular drink among airplane passengers. A small study by Yan and Dando hints that this is due to an increased perception of umami flavor while in the loud and pressurized environment of the cabin. An alternative explanation is that it has become tradition similar to eating popcorn at the cinema.

All content from Kiddle encyclopedia articles (including the article images and facts) can be freely used under Attribution-ShareAlike license, unless stated otherwise. Cite this article:
Tomato juice Facts for Kids. Kiddle Encyclopedia.