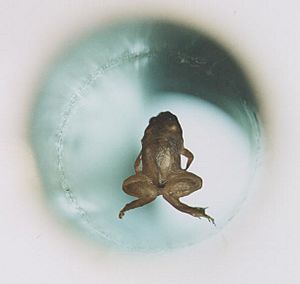 The 2000 Ig Nobel Prize in physics was awarded to Andre Geim, Radboud University, Nijmegen, and Michael Berry, University of Bristol, for the magnetic levitation of a live frog.

The Ig Nobel Prize is a parody of the Nobel Prize, which is awarded every autumn to celebrate ten unusual or trivial achievements in scientific research. Since 1991, the Ig Nobel Prizes have been awarded to “honor achievements that first make people laugh, and then make them think.” The name of the award, the “Ig Nobel Prize” ( IG-noh-BEL) is a pun on the word ignoble, an achievement “characterized by baseness, lowness, or meanness”, and is satirical social criticism that identifies absurd-sounding, yet useful research and knowledge.

Organized by the scientific humor magazine, the Annals of Improbable Research (AIR), the Ig Nobel Prizes are presented by Nobel laureates in a ceremony at the Sanders Theater, Harvard University, and are followed by the winners’ public lectures at the Massachusetts Institute of Technology.

All content from Kiddle encyclopedia articles (including the article images and facts) can be freely used under Attribution-ShareAlike license, unless stated otherwise. Cite this article:
Ig Nobel Prize Facts for Kids. Kiddle Encyclopedia.