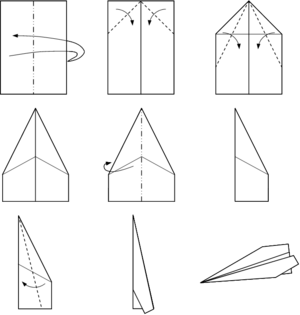 A paper plane is a toy airplane made from paper. The paper is folded in a certain way so that the folded paper actually glides. This is a form of origami; the Japanese art of paper folding. Paper planes were used originally for testing real airplanes. Today the making of paper planes is a hobby and a craft.

Takuo Toda holds the world record for the longest time in air (27.9 seconds). The distance record (226 feet 10 inches or 69.14 metres) was set by Joe Ayoob, with a plane constructed by John Collins, in February 2012.

All content from Kiddle encyclopedia articles (including the article images and facts) can be freely used under Attribution-ShareAlike license, unless stated otherwise. Cite this article:
Paper plane Facts for Kids. Kiddle Encyclopedia.