Le Roy is a village in Genesee County, New York, United States. The population was 4,391 at the 2010 census. The village lies in the center of the town of Le Roy at the intersection of Routes 5 and 19.

Prior to its incorporation in 1834, the first settlements in the village were to the east of the present village site.

The village was an early center for the manufacture of patent medicines by companies such as S. C. Wells & Co. and household chemicals. Products produced in Le Roy included Mustarine, a patent mustard-plaster compound, and Rough On Rats, a rodent poison. Earliest businesses in the village are the Bank of LeRoy (founded 1834, now Bank of America) and the Gazette-News newspaper (defunct 1993). Le Roy is the birthplace of Jell-O.

Le Roy holds the Oatka Festival every summer, the tradition originating in 1989. This festival includes celebration of the rich culture and history of the local area with vendors and several local businesses and restaurants participating each year. 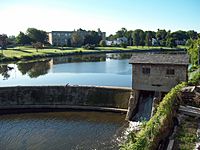 Oatka Creek, dammed to create a reservoir in the village

Oatka Creek, a tributary of the Genesee River, flows through the village.

All content from Kiddle encyclopedia articles (including the article images and facts) can be freely used under Attribution-ShareAlike license, unless stated otherwise. Cite this article:
Le Roy (village), New York Facts for Kids. Kiddle Encyclopedia.