Caledonia is a village in Livingston County, New York, USA. The population was 2,201 at the 2010 census. The name refers to Scotland.

The Village of Caledonia is located inside the Town of Caledonia and is southwest of Rochester, Monroe County. 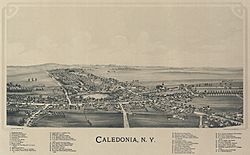 The village forms many associations with the adjacent hamlet of Mumford (Town of Wheatland), even though they are in different counties. Wheatland was formed from the Town of Caledonia in 1821, when the northern part became Inverness and the southern part remained Caledonia.

The fish hatchery, on the north end of the village was built by Seth Green and is the oldest in the New World.

The Caledonia Fish Hatchery, Caledonia House Hotel, and Clark-Keith House are listed on the National Register of Historic Places.

According to the United States Census Bureau, the village has a total area of 2.1 square miles (5.5 km²).None of the area is covered with water.

There were 902 households out of which 37.7% had children under the age of 18 living with them, 56.8% were married couples living together, 11.2% had a female householder with no husband present, and 28.4% were non-families. 24.3% of all households were made up of individuals and 10.9% had someone living alone who was 65 years of age or older. The average household size was 2.57 and the average family size was 3.06. 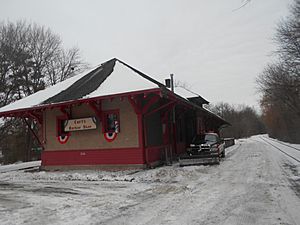 Caledonia's former station for the New York Central Railroad, now the location of a barber shop in January 2014

Ambulance services are provided by Genesee Valley Emergency Medical Services (GVEMS) providing two ambulances and one advanced life support fly car. These services are available for both the village and town residents and currently reside within the Caledonia Fire District fire hall.

All content from Kiddle encyclopedia articles (including the article images and facts) can be freely used under Attribution-ShareAlike license, unless stated otherwise. Cite this article:
Caledonia (village), New York Facts for Kids. Kiddle Encyclopedia.