The village lies on the eastern edge of the town of Bergen. The village is north of the junction of Routes 19 and 33.

The Bergen area was opened up in 1801 when a road was hacked through the thick "Northwoods" from LeRoy to Lake Ontario. (In its early days of settlement, Bergen was called "Northwoods".) Bergen was first settled in 1801 by Samuel Lincoln. In the same year George Letson, William Letson, Benajah Worden, Richard Abbey, Solomon Levi, Jesse Leach, James Letson, Gideon Elliott, and David Scott settled in town.

A colony of 60 families from Connecticut settled the area along Route 19 from Fort Hill (near Parmalee Road) to Black Creek from 1805 to 1810. The first store was a mile south of Route 33 on Route 19 on the east side of the road. The first group of stores was located from the intersection of Lake Road (Route 19) and Route 262 to the intersection of Route 19 and the Scottsville Road (Route 33A). This area was called "Buell's Corner", later "Bergen Corners" or "High Bergen". The first church organization was established in December 1807. The Congregational church was founded January 25, 1808. Harry Kelsey, a graduate of Yale College, taught the first school. The first frame house in the town was erected by Levi Ward, a pioneer physician. Jared Merritt built the first sawmill. Dr. Ward was proprietor of the first store, in 1808. The first inn was opened in 1809 by Samuel Butler. Colonel W.H. Ward was the first postmaster.

After the railroad came through in 1836, an area was laid out around the intersection of Lake Road (Route 19) and the railroad for businesses and houses. It was called "Wardville" after the Levi Ward family who laid it out. It was also called "Cork", after the Irish who settled there while and after the building of the railroad, and "Lower Bergen". The two areas were soon connected by residences and churches. 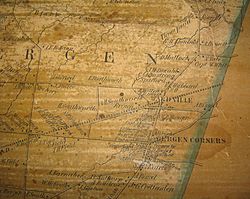 Wardville and Bergen Corners in 1854 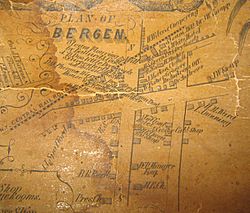 Fire initially destroyed the business area around the railroad tracks in 1866.

This area, along with the surrounding residences, was incorporated in on March 5, 1877, as the Village of Bergen. The village is near the center of the eastern boundary line, on the New York Central and Hudson River Railroad.

Fire destroyed the business area around the railroad tracks again in 1880. The Village Board passed an ordinance requiring that all structures in this area should be built of brick, stone, or wrought iron.

The west side of the district south of the railroad is on the National Register Some of the family went on from Bergen to the Rochester area and were primary developers of that area.

According to the United States Census Bureau, the village has a total area of 0.74 square miles (1.91 km2), all of it land. The village area drains north to Black Creek, an east-flowing tributary of the Genesee River.

There were 466 households out of which 35.2% had children under the age of 18 living with them, 57.5% were married couples living together, 6.4% had a female householder with no husband present, and 31.8% were non-families. 24.2% of all households were made up of individuals and 8.2% had someone living alone who was 65 years of age or older. The average household size was 2.66 and the average family size was 3.23.

Ralph and Rosie's is a popular pizzeria and deli on Lake Street in Bergen that has been owned and operated by the Marsocci family since March 1978.

All content from Kiddle encyclopedia articles (including the article images and facts) can be freely used under Attribution-ShareAlike license, unless stated otherwise. Cite this article:
Bergen (village), New York Facts for Kids. Kiddle Encyclopedia.