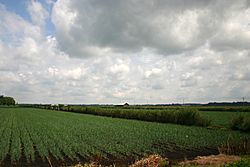 Elba is a village in Genesee County, New York, United States. The population was 676 at the 2010 census. The village is named after the island of Elba.

The village of Elba is in the town of Elba. The village is north of Batavia at the intersection of NYS Route 98 and NYS Route 262.

Elba claims to be the "Onion Capital of the World." Torrey Farms, one of the largest farms in New York, is located in Elba with about 8,000 acres (32 km2). They also own about 2,000 acres (8.1 km2) of muckland in Potter, New York, where they grow a large number of onions.

Elba hosts its annual "Onion Festival" on the first weekend of August. The festival draws the vast majority of Elba residents as well as people from neighboring towns in Genesee County, and some from all over New York. Among the events are the Fireman's Parade, Kiddie Parade, raffling of a car (usually a new Mustang GT), and the crowning of an "Onion Queen". All profits from the festival go towards the funding of the Elba Fire Department. Although in 2016 the Onion Festival was not held, an Onion Queen was announced at a repacement town event in July.

The site of the village was first settled in 1804, by John Roraback, a weaver. The village of Elba was incorporated in 1884. Previously, in 1882, an attempt to incorporate "Pine Hill" as the town's name led to dissension and a lawsuit. The name "Pine Hill" was derived from a Native American name for the area.

Elba was a stop on the Underground Railroad. There literally was an underground section, as there was a tunnel underneath Main Street between the inn and the home of its owner, Elias Pettibone, which is now collapsed.

The village is located in northern Genesee County near the center of the town of Elba. New York State Route 98 runs through the village as Main Street, leading north 11 miles (18 km) to Albion and south 5 miles (8 km) to Batavia, the Genesee County seat. New York State Route 262 passes through the southern part of the village, leading east 6 miles (10 km) to Byron and west 4 miles (6 km) to Oakfield.

According to the United States Census Bureau, the village has a total area of 1.0 square mile (2.6 km2). None of the area is covered with water.

There were 245 households out of which 38.8% had children under the age of 18 living with them, 63.7% were married couples living together, 9.8% had a female householder with no husband present, and 22.4% were non-families. 20.4% of all households were made up of individuals and 11.4% had someone living alone who was 65 years of age or older. The average household size was 2.84 and the average family size was 3.28.

All content from Kiddle encyclopedia articles (including the article images and facts) can be freely used under Attribution-ShareAlike license, unless stated otherwise. Cite this article:
Elba (village), New York Facts for Kids. Kiddle Encyclopedia.