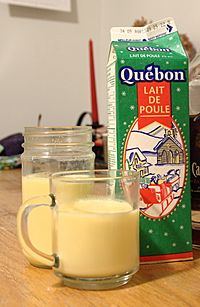 A carton and a glass of eggnog from Montreal, called by its French name lait de poule (literally "hen's milk").

Eggnog is a sweet dairy drink made with milk, cream, sugar, beaten eggs, and flavoured with cinnamon and nutmeg. Alcoholic kinds are also made. Eggnog is a popular drink in the United States and Canada, and is usually drank with winter parties such as Christmas and New Year. Brandy, rum or bourbon may be added. As for its origins, it is agreed upon that eggnog originated in present day United Kingdom in the early medieval period. The drink would then make its way to North America in the 18th century and become a popular beverage during the winter holidays.

All content from Kiddle encyclopedia articles (including the article images and facts) can be freely used under Attribution-ShareAlike license, unless stated otherwise. Cite this article:
Eggnog Facts for Kids. Kiddle Encyclopedia.