Polygonaceae is a family of flowering plants are herbs, shrubs, or rarely trees comprising about 30 genera and 1,000 species. The leaves are simple, alternate or rarely opposite, and usually stipulate. Some well known members include buckwheat (Fagopyrum), sorrel (Rumex), rhubarb (Rheum), and knotweed (Polygonum). 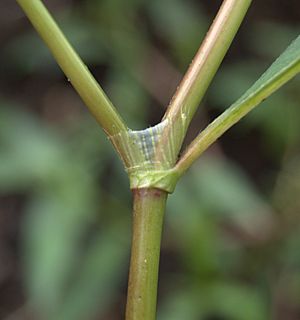 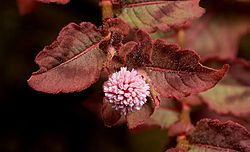 Most Polygonaceae are perennial herbaceous plants with swollen nodes, but trees, shrubs and vines are also present. The leaves of Polygonaceae are simple, and arranged alternately on the stems. Each leaf has a peculiar pair of fused, sheathing stipules known as an ochrea. Those species that do not have the nodal ochrea can be identified by their possession of involucrate flower heads. The flowers are normally bisexual, small, and actinomorphic, with a perianth of three to six sepals. After flowering, the sepals often become thickened and enlarged around the developing fruit. Flowers lack a corolla and in some, the sepals are petal-like and colorful. The androecium is composed of three to eight stamens that are normally free or united at the base. The ovary consists of three united carpels that form a single locule, which produces only one ovule. The ovary is superior with basal or free-central placentation. The gynoecium terminates in 1 to 3 styles, each of which ends in a single stigma.

All content from Kiddle encyclopedia articles (including the article images and facts) can be freely used under Attribution-ShareAlike license, unless stated otherwise. Cite this article:
Polygonaceae Facts for Kids. Kiddle Encyclopedia.