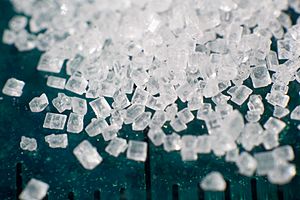 Magnification of grains of sucrose, the most common sugar.

Sugar is the common name for a number of chemical substances, some of which have a sweet taste. Mostly, it refers to either sucrose, lactose, or fructose. Sugar is contained in certain kinds of food, or it is added to give a sweet taste. Sugar is extracted from certain plants, such as sugarcane or sugar beet. 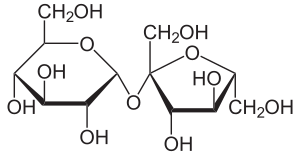 Chemical structure of sucrose – made of two smaller sugars

Starch is a chemical found in foods such as bread, crackers, and potatoes. It is a complex carbohydrate that is made from many glucose molecules. When starch is eaten, the human body breaks it apart into smaller sugars. An enzyme is added in the mouth, but it only begins to work in the stomach. Pure starch is actually tasteless in the mouth.

Brazil produces the most sugar per person and India's total consumption of sugar is the highest for a country. 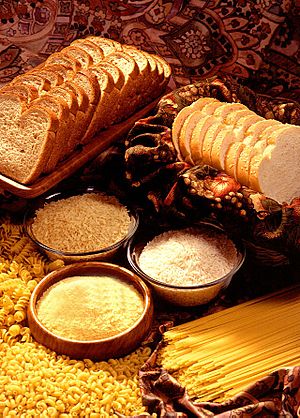 Starchy foods made of complex carbohydrates

There are other chemical substances that can be used to produce a sweet taste, but that are not sugar. One of them, commonly called Stevia is gained from a plant with the same name. Others, like aspartame, are completely synthetic. In general, these substances are known as artificial sweeteners, or sugar substitutes. People eat them to avoid health problems that sugar causes.

Sugar can be different colours. For example, brown sugar has molasses in it, and is often used in baking.

All content from Kiddle encyclopedia articles (including the article images and facts) can be freely used under Attribution-ShareAlike license, unless stated otherwise. Cite this article:
Sugar Facts for Kids. Kiddle Encyclopedia.