Jacmel, is a commune in southern Haiti founded by the Spanish in 1504 and repopulated by the French in 1698. It is the capital of the department of Sud-Est and has an estimated population of 40,000, while the commune of Jacmel had a population of 137,966 at the 2003 Census. The town's name is derived from its indigenous Taíno name of Yaquimel. In 1925, Jacmel was dubbed as the "City of Light," becoming the first in the Caribbean to have electricity.

The city has well-preserved historical French colonial architecture that dates back from the early nineteenth century and has little changed. The town has been tentatively accepted as a World Heritage site and UNESCO reports that it has sustained damage in the 2010 Haiti earthquake.

Christopher Columbus gave the name Puerto de Brasil ("Brazil port") to the place where Jacmel is now because there were many trees called "Brasil" (English: Brazilwood) in the region that were cut and sent to Spain; the tree has a yellow substance (and wood) that was used to give that color to hair, cloths and other objects.

In 1504, Nicolás de Ovando, Spanish governor of the Hispaniola, founded the town of Villanueva de Yáquimo (or Villanova de Yáquimo). But people left the town and French people came to live there; in 1698, the new town of Jacmel was founded. 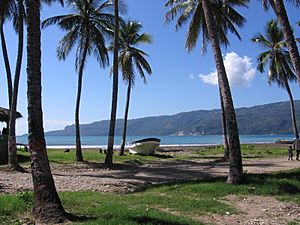 A beautiful beach in Jacmel

The port town was internationally known for its very vibrant art scene and elegant townhouses dating from the 19th century. Among the wealth of art and crafts available in Jacmel are the papier-mâché, done by nearly 200 artisans. In recent years Jacmel has been host to a large film festival, called the Jacmel Film Festival, that started in 2004, and in 2007 the international Jacmel Music Festival was successfully launched as well. Its carnival, the nearby Bassin Bleu (Haiti's most famous natural deep pools), and the scenic white sand (Timouillage, Cabic, Raymond-les-bains, located primarily in Cayes-Jacmel) beaches attract many visitors. The town is regarded as one of the safest in the country, and foreign visitors that come to Haiti seeking tranquility often go for Jacmel. 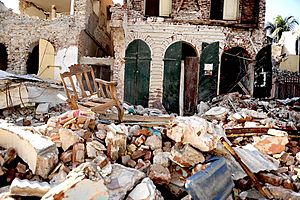 Shown here Jan. 17, 2010, are destroyed buildings in Jacmel, Haiti. According to local officials about 350 people lost their lives in Jacmel due to the earthquake that hit the region Jan. 12, 2010

On 12 January 2010, Haiti experienced a magnitude 7.0 earthquake that caused heavy damage and casualties in Jacmel. The first temblor rocked the city at 4:40 pm, but the later temblor at 5:37 pm stopped the cathedral's clock. About 70 per cent of the homes were damaged, with most of the heavier damage being in the poorer neighbourhoods. A small tsunami hit Jacmel Bay, with the ocean receding, leaving fish high and dry on the seabed.

In December 2010, the Capponi Construction Group, a Miami-based construction company, decided to help with the revitalization of Jacmel. This initiative was created to help stimulate a self-sustaining tourism economy for Haiti, while preserving its arts, culture and traditions. The company promotes best practices to provide a socio-economic system for thousands of Haitians living in the southeast region. Capponi Group Haiti is also restoring a 200-year-old coffee-sorting house at the port of Jacmel. The project hopes to again make Jacmel a commercial and tourist center.

All content from Kiddle encyclopedia articles (including the article images and facts) can be freely used under Attribution-ShareAlike license, unless stated otherwise. Cite this article:
Jacmel Facts for Kids. Kiddle Encyclopedia.