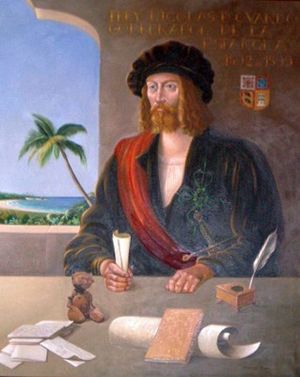 Nicolas de Ovando was born in 1460 in the town of Brozas, in Extremadura, Spain. His family was very religious and, when young, he joined the military religious Order of Alcantara where, in 1478, he was named Comendador de Lares (Commander of Lares), a very important position in the Order.

As Commander of Lares, he was very appreciated by the Spanish Catholic Kings and, in particular, by Queen Isabella. On 3 September 1501 (Oviedo said in 1502), he was named as Governor of Hispaniola and of all lands discovered in America.

On 13 February, 1502 he went out of the port of Sanlúcar de Barrameda, Spain to go to the Hispaniola island with a fleet of 32 ships. On the fleet, there were 2,500 people, including priests, soldiers and colonists (some of them with their families), who were going to live in the Hispaniola. Among those colonists was Bartolomé de las Casas, later known as the Protector of the Indians, and also Francisco Pizarro, who conquered the Inca Empire.

The plan of Ovando was to develop the West Indies economically and expand the Spanish influence in the region.

The administration of Ovando in Hispaniola was one of great cruelty toward the Taíno Indians. When the Spaniards came to the island in 1492, the native population was 400,000 (estimated) but in 1508 there were only 60,000 Indians.

Because the new colonists needed more workers for the gold mines and farms, they brought, as slaves, Indians from the Lucayas (now, the Bahamas) islands. Then they brought slaves from Spain (Ladinos, that is, of Africa origin but born in Spain); those were the first African slaves brought to America.

Ovando sent Andrés Morales to explore completely the Hispaniola island. Morales made the most complete map of the island. Sebastián de Ocampo was sent to find out if Cuba was an island or part of the continent; after 8 or 10 months, Ocampo came back with the information that Cuba was an island. In 1508, Juan Ponce de León was sent with 50 men to conquer the island of San Juan (now the island of Puerto Rico).

In 1509, Ovando went back to Spain where he was made Comendador Mayor ("Head Commander") of the Order of Alcantara. During a meeting of the Order in Seville, Spain, he died on 29 May 1511 (Oviedo said in 1518). He was buried in the Church of San Benito, in the city of Alcántara, Extremadura, Spain.

All content from Kiddle encyclopedia articles (including the article images and facts) can be freely used under Attribution-ShareAlike license, unless stated otherwise. Cite this article:
Nicolás de Ovando Facts for Kids. Kiddle Encyclopedia.