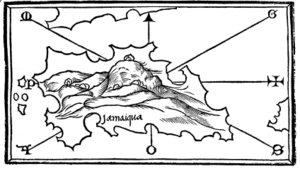 Juan de Esquivel (about 1480 - about 1513) was a Spanish soldier and colonial administrator (a Conquistador). He conquered and governed the island of Jamaica for Spain.

He was born in Seville, Spain, about 1480. He came with Nicolás de Ovando to America, to the Hispaniola island, in 1502. In 1503, Ovando sent him with 400 men to the eastern part of the island to fight the Taínos in that region, the Higüey region. There he founded two new towns: Santa Cruz de Hicayagua, or Icayagua, the present city of Santa Cruz del Seibo; and Salvaleón de Higüey.

In 1509, the new Governor of the Hispaniola, Diego Columbus, sent Juan de Esquivel with 70 men to Jamaica to complete the conquest of that island. He founded a town, Sevilla La Nueva (in English, "The New Seville") on the north coast.

All content from Kiddle encyclopedia articles (including the article images and facts) can be freely used under Attribution-ShareAlike license, unless stated otherwise. Cite this article:
Juan de Esquivel Facts for Kids. Kiddle Encyclopedia.