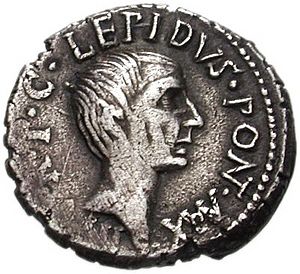 Lepidus on a coin

Marcus Aemilius Lepidus (born 88/89 BC, died 12/13 BC) was a Roman politician. He was one of the closest men to Julius Caesar. He was Caesar's deputy in Rome when Caesar was away from Rome defeating Pompey in the battle of Pharsalus in Greece. He served as Pontifex Maximus (High Priest) after Caesar's death.

Together with Octavian and Mark Antony he formed the Second Triumvirate to oppose the conspirators. The Triumvirate was set up to sideline the Consuls and Senate, which means it was the effective end of the Roman Republic.

Lepidus was older than the other two triumvirs. After the Battle of Philippi, he governed Spain and part of North Africa. He was blamed for a revolt in Sicily. This gave Octavian the excuse to strip him of his offices, except for Pontifex Maximus. He died peacefully in Circeii in Italy about end 12 to early 13 BC.

All content from Kiddle encyclopedia articles (including the article images and facts) can be freely used under Attribution-ShareAlike license, unless stated otherwise. Cite this article:
Marcus Aemilius Lepidus Facts for Kids. Kiddle Encyclopedia.