The Egyptian cobra (naja haje) is a type of venomous cobra. It was worshiped by the Ancient Egyptians. It lives in both North Africa and Southwestern Asia. It is one of the most venomous snakes in the world. Egyptian cobras can grow up to 5 feet or 6 feet, 8 inches (1.5–2 m) and have been seen as large as 8 feet in some areas. Small symbols of Egyptian cobras were included in the crown of the pharaohs.

The Egyptian cobra is one of the largest cobras of the African continent. The head is large and depressed and slightly distinct from the neck. The neck of this species has long cervical ribs capable of expanding to form a hood, like all other cobras. The snout of the Egyptian cobra is moderately broad and rounded. The eyes are quite big with round pupils. The body of the Egyptian cobra is cylindrical and stout with a long tail. The length of the Egyptian cobra is largely dependent on subspecies, geographical locale, and population. The average length of this species is between 1 and 2 metres (3.3 and 6.6 ft) in length, with a maximum length of just under 3 metres (9.8 ft). The most recognizable characteristics of this species are its head and hood. The colour is highly variable, but most specimens are some shade of brown, often with lighter or darker mottling, and often a "tear-drop" mark below the eye. Some are more copper-red or grey-brown in colour. Specimens from northwestern Africa (Morocco, western Sahara) are almost entirely black. The ventral side is mostly a creamy white, yellow brown, grayish, blue grey, dark brown or black in colouration, often with dark spots. 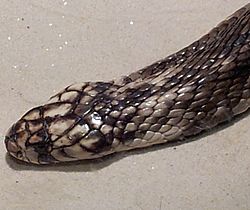 An Egyptian cobra at Jacksonville Zoo and Gardens.

The Egyptian cobra ranges across most of North Africa north of the Sahara, across the savannas of West Africa to the south of the Sahara, south to the Congo basin and east to Kenya and Tanzania. Older literature records from southern Africa and the Arabian Peninsula refer to other species (see Taxonomy section below)

The Egyptian cobra can also be found in captivity at zoos both in and outside of the snake’s natural range. The Giza Zoo and the San Diego Zoo as well as the Virginia Aquarium include the Egyptian Cobra in their reptile collection.

On March 26, 2011, the Bronx Zoo informed the public that their reptile house was closed after a venomous adolescent female banded Egyptian cobra was discovered missing from its off-exhibit enclosure on March 25. Zoo officials were confident the missing cobra would be found in the building and not outside, since the Egyptian cobra is known to be uncomfortable in open areas. The snake's metabolism would also have been impacted by the cold weather outdoors at that time in the Bronx. The cobra was found in a dark corner of the zoo's reptile house on March 31, 2011, in good health. After a contest, she was named "Mia" for "missing in action."

They occur in a wide variety of habitats like, steppes, dry to moist savannas, arid semi-desert regions with some water and vegetation. This species is frequently found near water. The Egyptian cobra is also found in agricultural fields and scrub vegetation. These cobras do also occur in the presence of humans where they often enter houses. They are attracted to the human villages by chickens and rats that are attracted by garbage. There are also notes of Egyptian cobras swimming in the Mediterranean sea, so they seem to like water where they have been found quite often.

The Egyptian cobra is a terrestrial and crepuscular or nocturnal species. It can however, be seen basking in the sun at times in the early morning. This species shows a preference for a permanent home base in abandoned animal burrows, termite mounds or rock outcrops. It is an active forager sometimes entering human habitations, especially when hunting domestic fowl. Like other cobra species, it generally attempts to escape when approached, at least for a few metres, but if threatened it assumes the typical upright posture with the hood expanded and strikes. This species prefers to eat toads, but it will prey on small mammals, birds, eggs, lizards and other snakes.

The venom of the Egyptian cobra consists mainly of neurotoxins and cytotoxins. The average venom yield is 175 to 300 mg in a single bite, and the murine subcutaneous LD50 value is 1.15 mg/kg.

The venom affects the nervous system, stopping the nerve signals from being transmitted to the muscles and at later stages stopping those transmitted to the heart and lungs as well, causing death due to complete respiratory failure. Envenomation causes local pain, severe swelling, bruising, blistering, necrosis and variable non-specific effects which may include headache, nausea, vomiting, abdominal pain, diarrhea, dizziness, collapse or convulsions along with possible moderate to severe flaccid paralysis. Unlike some other African cobras (for example the red spitting cobra), this species does not spit venom.

In Ancient Egyptian culture and history

The Egyptian cobra was represented in Egyptian mythology by the cobra-headed goddess Meretseger. A stylised Egyptian cobra — in the form of the uraeus representing the goddess Wadjet — was the symbol of sovereignty for the Pharaohs who incorporated it into their diadem. This iconography was continued through the Ptolemaic Kingdom (305 BC–30 BC).

Most ancient sources say that Cleopatra and her two attendants committed suicide by being bitten by an aspis, which translates into English as "asp". The snake was reportedly smuggled into her room in a basket of figs. Plutarch wrote that she performed experiments on condemned prisoners and found aspis venom to be the most painless of all fatal venoms. This "aspis" was far more likely to be Naja haje (the Egyptian cobra) than any other type of snake. However, the accounts of her apparent suicide have been questioned, since death from this snake's venom is relatively slow and it can cause damage to the tissue sometimes, and the snake is large, so it would be hard to conceal.

The Egyptian cobra garnered increased attention in Canada in the fall of 2006 when a pet cobra became loose and forced the evacuation of a house in Toronto for more than six months when it was believed to have sought refuge in the home's walls. The owner was fined $17,000 and sentenced to jail.

All content from Kiddle encyclopedia articles (including the article images and facts) can be freely used under Attribution-ShareAlike license, unless stated otherwise. Cite this article:
Egyptian cobra Facts for Kids. Kiddle Encyclopedia.