Mitilene is a capital of lesbos island. Lesbos is the third biggest island in Greece. It is a beautiful city with important history. It is located in the east of Lesbos island. Mytilene has 36.196 inhabitants. In the past, Mytilene was a rich town and this seems from the rich houses in the city. Also, it has got a big port which connect Mytilene with Piraeus and other ports. 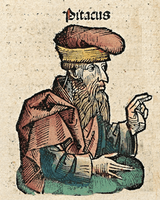 Pittacus of Mytilene (c. 640 - 568 BC), one of the Seven Sages of Greece; woodcut from the Nuremberg Chronicle. 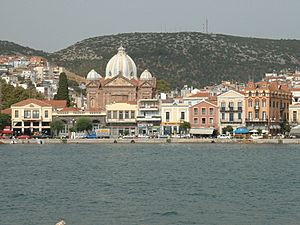 View of the port, with the dome of St.Therapon. 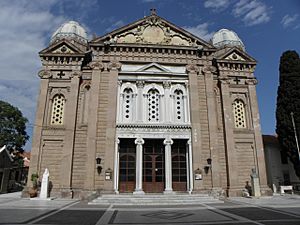 The church of St.Therapon at the port

As an ancient city, lying off the east coast, Mytilene was initially confined to a small island just offshore that later was joined to Lesbos, creating a north and south harbor. According to the writings of Homer, the island of Lesbos has been an organized city since 1054 B.C. The early harbor of Mytilene was united during ancient times with a channel 700 meters long and 30 meters wide. The Roman writer Longus speaks of white stone bridges linking the two sides. The Greek word Εύριπο or Euripus is a commonly used term when referring to a strait. The strait allowed ancient sail boats called Triremes, with 3 tiers of rowers or more. The boats that passed were ca. 6 meters wide plus oars and had depth of 2 meters.

The areas of the city that were densely populated connected the two bodies of land with marble bridges. They usually followed a curved line. The strait begins at the old market called Apano Skala. It was also close to Metropolis Street and ended at the Southern Harbor. One could argue that the channel transversed what is now called Ermou Street. Over time the strait began to collect silt and earth. There was also human intervention for the protection of the Castle of Mytilene. The strait eventually filled with earth.

Mytilene contested successfully with Methymna in the north of the island for the leadership of the island in the 7th century BC and became the centre of the island’s prosperous eastern hinterland. Her most famous citizens were the poets Sappho and Alcaeus and the statesman Pittacus (one of the Seven Sages of ancient Greece). The city was famed for its great output of electrum coins struck from the late 6th through mid-4th centuries BC. Mytilene revolted against Athens in 428 BC but was overcome by an Athenian expeditionary force. The Athenian public assembly voted to massacre all the men of the city and to sell the women and children into slavery but changed its mind the next day. A fast trireme sailed the 186 nautical miles (344 km) in less than a day and brought the decision to cancel the massacre.

Aristotle lived on Mytilene for two years, 337-335 BC, with his friend and successor, Theophrastus (a native of the island), after becoming the tutor to Alexander, son of King Philip II of Macedon.

The Romans, among whom was a young Julius Caesar, successfully defeated Mytilene in 81 BC at the Siege of Mytilene. Although Mytilene supported the losing side in most of the great wars of the 1st century BC, her statesmen succeeded in convincing Rome of her support of the new ruler of the Mediterranean and the city flourished in Roman times.

In AD 56, Luke the Evangelist, Paul the Apostle and their companions stopped there briefly on the return trip of Paul's third missionary journey (Acts 20:14), having sailed from Assos (about 50 km (31 mi) away). From Mytilene they continued towards Chios (Acts 20:15).

The novel Daphnis and Chloe, by Longus, is set in the country around it and opens with a description of the city.

The city of Mytilene was also home to 9th century Byzantine Saints who were brothers, Saint George the Archbishop of Mytilene, Saint Symeon Stylites of Lesbos, and Saint David the Monk. The Church of Saint Symeon, Mytilene venerates one of the three brothers.

Catching the eye of the Empress Zoe, Constantine IX Monomachos was exiled to Mytilene on the island of Lesbos by her second husband, Michael IV. The death of Michael IV and the overthrow of Michael V in 1042 led to Constantine being recalled from his place of exile and appointed as a judge in Greece.

Lesbos and Mytilene had an established Jewish population since ancient times. In 1170 Benjamin of Tudela found ten small Jewish communities on the island.

In the Middle Ages, it was part of the Byzantine Empire and was occupied for some time by the Seljuqs under Tzachas in 1085. In 1198, the Republic of Venice obtained the right to commerce from the city's port.

In the 13th century, it was captured by the Emperor of Nicaea, Theodore I Laskaris. In 1335, the Byzantines, with the help of Ottoman forces, reconquered the island, then property of the Genoese nobleman Domenico Cattaneo. In 1354, emperor John V Palaiologos gave it to the Genoese adventurer Francesco Gattilusio, who married the emperor's sister, Maria. They renovated the fortress in 1373, and it remained in Genoese hands until 1462, when it was captured by the Ottoman sultan Mehmed II.

Mytilene with the rest of Lesbos remained under Ottoman control until the First Balkan War in 1912, when it became part of the Kingdom of Greece.

Mytilene is located in the southeastern part of the island, north and east of the Bay of Gera. It has a land area of 107.46 square kilometres (41.49 sq mi) and a population of 36,196 inhabitants (2001). With a population density of 336.8/km² it is by far the most densely populated municipal unit in Lesbos. The next largest towns in the municipal unit are Vareiá (pop. 1,254), Pámfila (1,247), Mória (1,207), and Loutrá (1,118). The Greek National Road 36 connects Mytilene with Kalloni. Farmlands surround Mytilene, the mountains cover the west and to the north. The airport is located a few kilometres south of town. Since the 2011 local government reform, the cities and towns within the municipality changed.

A bottle of ouzo

Mytilene has a port with ferries to the nearby islands of Lemnos and Chios and Ayvalık and at times Dikili in Turkey. The port also serves the mainland cities of Piraeus, Athens and Thessaloniki. One ship, named during the 2001 IAAF games in Edmonton Aeolos Kenteris, after Kostas Kenteris, used to serve this city (his hometown) with 6-hour routes from Athens and Thessaloniki. The main port serving Mytilene on the Greek mainland is Piraeus.

The city produces ouzo. There are more than 15 commercial producers on the island.

The city exports sardines harvested from the Bay of Kalloni and olive oil and woodwork.

All content from Kiddle encyclopedia articles (including the article images and facts) can be freely used under Attribution-ShareAlike license, unless stated otherwise. Cite this article:
Mytilene Facts for Kids. Kiddle Encyclopedia.