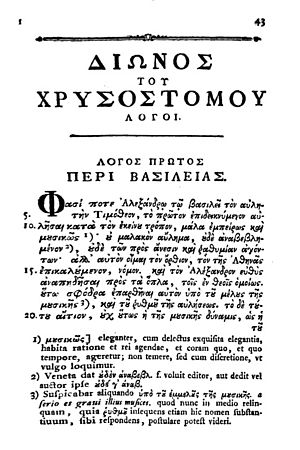 Dio Chrysostom (Greek: Δίων Χρυσόστομος) was a Greek speaker, writer, philosopher and historian of the Roman Empire. He lived in the 1st century, from about the year 40 to around the year 115. He is also known as Dion of Prusa or Dio Cocceianus. Eighty of his Discourses (or Orations) are known. A few Letters and a funny mock essay In Praise of Hair, as well as a few other fragments also survive. His surname Chrysostom comes from the Greek chrysostomos, which literally means "golden-mouthed". He should not be confused with the Roman historian Cassius Dio, nor with the 4th-century bishop John Chrysostom of Constantinople.

All content from Kiddle encyclopedia articles (including the article images and facts) can be freely used under Attribution-ShareAlike license, unless stated otherwise. Cite this article:
Dio Chrysostom Facts for Kids. Kiddle Encyclopedia.