Diogenes of Sinope facts for kids 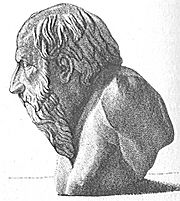 Diogenes of Sinope (or Diogenes the Cynic) was an Ancient Greek philosopher. He was born in the town of Sinope (now called Sinop, Turkey) around the year 412 BC and died in the city of Corinth, Greece on the year 323 BC.

After being exiled for debasing the currency, he moved to Athens. He had a simple life-style and behaviour. This gave him a basis to criticize the social values and institutions of the corrupt, confused society he saw around him.

Diogenes made a virtue of poverty. He begged for a living and often slept in a large ceramic jar in the marketplace. He became notorious for his philosophical stunts. He used to carry a lamp during the day, and claimed he was looking for an honest man.

He criticized Plato, disputed his interpretation of Socrates. He sabotaged Plato's lectures, distracting attenders by bringing food and eating during the discussions. Diogenes was also noted for having publicly mocked Alexander the Great.

Diogenes helped Antisthenes create cynicism, a philosophy that focuses on living a simple life without the need for money, fame, power, or possessions.

Diogenes was captured by pirates and sold into slavery. Eventually he settled in Corinth. There he explained cynicism to Crates, who taught it to Zeno of Citium. Zeno worked on stoicism, which became one of the main schools of Greek philosophy.

None of Diogenes' writings have survived, but there are some details of his life from anecdotes. The anecdotes come from Diogenes Laërtius' book Lives and Opinions of Eminent Philosophers and some other sources.

All content from Kiddle encyclopedia articles (including the article images and facts) can be freely used under Attribution-ShareAlike license, unless stated otherwise. Cite this article:
Diogenes of Sinope Facts for Kids. Kiddle Encyclopedia.