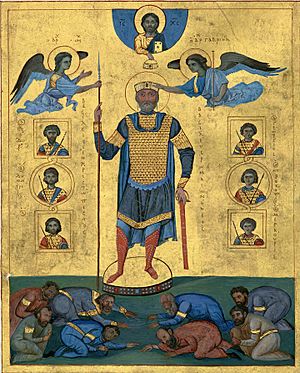 Painting of Basil II, from an 11th century manuscript.

Basil II (958 – December 15 1025), was a Byzantine emperor from the Macedonian dynasty from January 10 976 to December 15, 1025. Under his reign, the Byzantine Empire reached its greatest height in nearly five centuries.

All content from Kiddle encyclopedia articles (including the article images and facts) can be freely used under Attribution-ShareAlike license, unless stated otherwise. Cite this article:
Basil II Facts for Kids. Kiddle Encyclopedia.