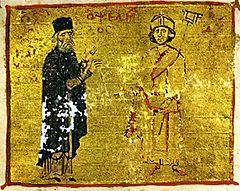 Michael Psellos or Psellus (Greek: Μιχαὴλ Ψελλός Michaḗl Psellós) was a Byzantine Greek monk, savant, writer, philosopher, politician and historian. He was born in 1017 or 1018, and is believed to have died in 1078, although it has also been maintained that he remained alive until 1096.

The main sources of information about Psellos' life are his own works, which contain extensive autobiographical passages. Michael Psellos was probably born in Constantinople. His family hailed from Nicomedia and, according to his own testimony, counted members of the consular and patrician elite among its ancestors. His baptismal name was Constantine; Michael was the monastic name he chose when he entered a monastery later in life. "Psellos" ('the stammerer') probably was a personal by-name referring to a speech defect.

Michael Psellos was educated in Constantinople. At around the age of ten, he was sent to work outside the capital as a secretary of a provincial judge, in order to help his family raise the dowry for his sister. When his sister died, he gave up that position and returned to Constantinople to resume his studies. While studying under John Mauropus, he met the later Patriarchs Constantine Leichoudes and John Xiphilinos, and the later emperor Constantine X Doukas. For some time, he worked in the provinces again, now serving as a judge himself. Some time before 1042 he returned again to Constantinople, where he got a junior position at court as a secretary (ὑπογραμματεύς) in the imperial chancellery. From there he began a rapid court career. He became an influential political advisor to emperor Constantine IX Monomachos (reigned 1042–1055). During the same time, he became the leading professor at the University of Constantinople, bearing the honorary title of "Chief of the Philosophers" (ὕπατος τῶν φιλοσόφων hypatos tōn philosophōn).

Despite his eminence and prowess in learning, his knowledge of Latin was cloudy enough for him to confuse Cicero with Caesar. This is cited as a prime example of how the Eastern Roman Empire had lost nearly all of its connections to its Roman roots by the High Middle Ages.

Towards the end of Monomachos' reign, Psellos found himself under political pressure for some reason and finally decided to leave the court, entering the Olympus monastery on Mount Olympus in Bithynia in 1054. After Monomachos' death, however, he was soon recalled to court by his successor, Empress Theodora (reigned 1055–1056). Throughout the following years, he remained active in politics, serving as a high-ranking political advisor to several successive emperors. He played a decisive political role in the transition of power from Michael VI to Isaac I Komnenos in 1057; then from Isaac Komnenos to Constantine X Doukas (1059); and then again from Romanos IV Diogenes to Michael VII Doukas (1071). As Psellos had served as Michael's personal teacher during the reign of Michael's father Constantine, and as he had played an important role in helping Michael gain power against his adversary and stepfather Romanos, Psellos probably entertained hopes of an even more influential position as a teacher and advisor under him. However, Michael seems to have been less inclined towards protecting Psellos and after the mid-1070s there is no more information about any role played by Psellos at court. As his own autobiographic accounts cease at this point, there is little reliable information about his later years. Some scholars believe that Psellos had to retreat into a monastery again at some time during the 1070s. Following a remark by Psellos' fellow historian Joannes Zonaras, it is believed by most scholars that Psellos died soon after the fall of Michael VII in 1078, although some scholars have also proposed later dates. What is known is that Theophylaktos of Bulgaria wrote a letter to Psellos's brother comforting him on the death of his brother saying that, "Your brother has not died, but has departed to God released of both a painful life and disease".

The Chronographia, a history of the Byzantine emperors during the 100 years leading up to Psellos' own time, is probably Psellos' best known and most accessible work. It covers the reigns of 14 emperors and empresses, beginning with the almost 50-year-long reign of Basil II, the "Bulgar-Slayer" (976–1025), and ending some time during the reign of Michael VII Doukas (1071–1078). It is structured mainly as a series of biographies. Unlike most other historiographical works of the period, it emphasizes the description of characters rather than details of political and military events. It also includes extensive autobiographical elements about Psellos' political and intellectual development, and it gives far greater weight to those periods when Psellos was active in politics, especially the reign of Constantine IX, giving the whole work almost the character of a political memoir. It is believed to have been written in two parts. The first covers the emperors up to Isaac I Komnenos. The second, which has a much more strongly apologetic tone, is in large parts an encomium on Psellus' protectors, the emperors of the Doukas dynasty.

Psellos left many other writings:

Psellos was universally educated and had a reputation for being one of the most learned men of his time. He prided himself on having single-handedly reintroduced to Byzantine scholarship a serious study of ancient philosophy, especially of Plato. His predilection for Plato and other pagan (often Neoplatonic) philosophers led to doubts about the orthodoxy of his faith among some of his contemporaries, and at one point he was forced to make a public profession of faith in his defense. He also prided himself on being a master of rhetoric, combining the wisdom of the philosopher and the persuasiveness of the rhetorician. This made him the model of a political leader and advisor. Among modern commentators, Psellos' penchant for long autobiographical digressions in his works has earned him accusations of vanity and ambition. At the same time, his political career and the contents of his Chronographia have led commentators to characterize him as obsequious and opportunistic, because of his ostensibly uncritical stance towards some of the emperors and because of the many shifts in his political loyalty over the course of his life . However, other commentators argue that there is a powerful ironic undercurrent running through his work, especially the Chronographia, transmitting highly critical and subversive messages about the emperors portrayed, or even about Byzantine Christian beliefs and morality at large.

As mentioned above, serious questions were raised during Psellos' lifetime concerning his religious beliefs. For example, according to Byzantinist Anthony Kaldellis, "In 1054 he [Psellos] was accused by his erstwhile friend, the future Patriarch John Xiphilinos, of forsaking Christ to follow Plato." Even stronger doubts arose concerning Psellos' student, John Italos, who succeeded Psellos as Chief of the Philosophers. Italos was publicly accused of teaching such "Hellenizing" ideas as metempsychosis and the eternity of the world. Italos faced such accusations twice, and both times he confessed and recanted.

It was once thought that there was another Byzantine writer of the same name, Michael Psellos the Elder (now also called Pseudo-Psellos), who lived on the island of Andros in the 9th century, and who was a pupil of Photius and teacher of emperor Leo VI the Wise. Michael Psellos himself was also called "the younger" by some authors. This belief was based on an entry in a medieval chronicle, the Σύνοψις Κεδρηνοῦ-Σκυλίτση, which mentions the name in that context. It is now believed that the inclusion of the name Psellos in this chronicle was the mistake of an ignorant copyist at a later time, and that no "Michael Psellos the elder" ever existed.

The term "Pseudo-Psellos" is also used in modern scholarship to describe the authorship of several later works that are believed to have been falsely ascribed to Psellos in Byzantine times. 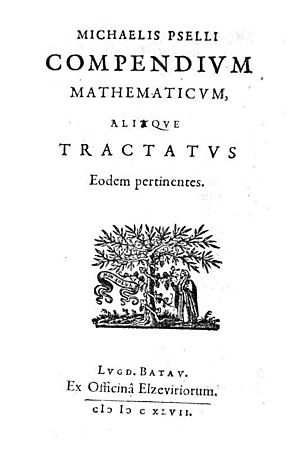 All content from Kiddle encyclopedia articles (including the article images and facts) can be freely used under Attribution-ShareAlike license, unless stated otherwise. Cite this article:
Michael Psellos Facts for Kids. Kiddle Encyclopedia.