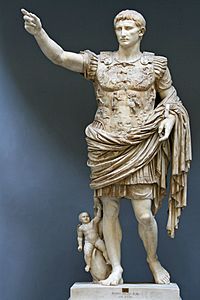 Roman Emperors were rulers of the Roman Empire, wielding power over its citizens and military. The empire was developed as the Roman Republic invaded and occupied most of Europe and portions of northern Africa and western Asia. Under the republic, regions of the empire were ruled by provincial governors answerable to and authorised by the "Senate and People of Rome".

Rome and its senate were ruled by a variety of magistrates – of whom the consuls were the most powerful. The republic ended, and the emperors were created, when these magistrates became legally and practically subservient to one citizen with power over all other magistrates. Augustus, the first emperor, was careful to maintain the facade of republican rule, taking no specific title for his position and calling the concentration of magisterial power Princeps Senatus (the first man of the senate).

This style of government lasted for 300 years, and is thus called the Principate era.

In the late 3rd century, after the Crisis of the Third Century, Diocletian formalised and embellished the recent manner of imperial rule, establishing the so-called 'Dominate' period of the Roman Empire. This was characterised by the explicit increase of authority in the person of the Emperor, and the use of the style 'Dominus Noster' ('Our Lord').

The rise of powerful Barbarian tribes along the borders of the empire and the challenge they posed to defense of far-flung borders and unstable imperial succession led Diocletian to experiment with sharing imperial titles and responsibilities among several individuals - a partial reversion to pre-Augustian Roman traditions. For nearly two centuries thereafter there was often more than one emperor at a time, frequently dividing the administration of the vast territories between them.

The Empire and chain of emperors continued until the death of Constantine XI and the capture of Constantinople by the Ottoman Empire in 1453. The use of the modern terms "Byzantium," "Byzantine Empire," and "Byzantine Emperor" to refer to the medieval period of the Roman Empire has been common, but not universal, among Western scholars since the 18th century, and continues to be a subject of specialist debate today.

(68–96) Year of the Four Emperors and Flavian dynasty

Main pages: Year of the Five Emperors and Severan dynasty

(235–285) Crisis of the Third Century and Gordian dynasty

Andreas died a pauper during 1502, in spite of having sold his titles and royal and imperial rights to Ferdinand II of Aragon and Isabella I of Castile.

All content from Kiddle encyclopedia articles (including the article images and facts) can be freely used under Attribution-ShareAlike license, unless stated otherwise. Cite this article:
List of Roman emperors Facts for Kids. Kiddle Encyclopedia.