Gregory the Illuminator facts for kids 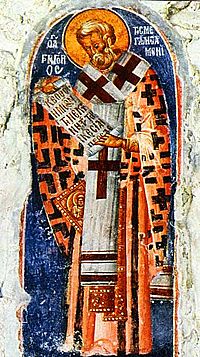 Saint Gregory the Illuminator or Saint Gregory the Enlightener (Armenian: Գրիգոր Լուսաւորիչ translit. Grigor Lusavorich, Greek: Γρηγόριος Φωστήρ or Φωτιστής, Gregorios Phoster or Photistes), the founder and patron saint of the Armenian Apostolic Church, he was born about 257.

He belonged to the royal line of the Arsacid Dynasty, being the son of a Parthian named Anak, who assassinated Chosroes I of Armenia, and thus brought ruin on himself and his family.

All content from Kiddle encyclopedia articles (including the article images and facts) can be freely used under Attribution-ShareAlike license, unless stated otherwise. Cite this article:
Gregory the Illuminator Facts for Kids. Kiddle Encyclopedia.