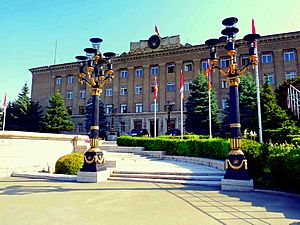 On December 10 1991, a referendum held in the NKAO and the neighboring Shahumian region resulted in a declaration of independence from Azerbaijan as the Nagorno-Karabakh Republic. The country remains unrecognized by any international organization or country, including Armenia. Representatives of the governments of Armenia and Azerbaijan have since been holding peace talks mediated by the OSCE Minsk Group.

All content from Kiddle encyclopedia articles (including the article images and facts) can be freely used under Attribution-ShareAlike license, unless stated otherwise. Cite this article:
Nagorno-Karabakh Republic Facts for Kids. Kiddle Encyclopedia.