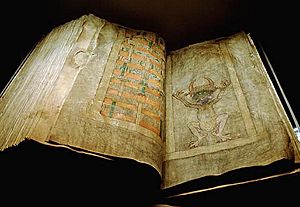 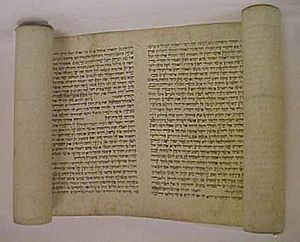 Scroll of the Book of Esther, Seville, Spain

A codex (plural codices) is a book-like object with writing on it. On a codex there are separate pages, whereas a scroll is one continuous long document. The term is used for book-type objects written by hand, and includes books written on vellum or parchment.

The Romans developed the form from wooden writing tablets. The codex's gradual replacement of the scroll—the dominant book form in the ancient world—has been called the most important advance in book making before the invention of printing.

The codex transformed the shape of the book itself, and offered a form that lasted for centuries. The spread of the codex is often associated with the rise of Christianity, which adopted the format for use with the Bible early on. First described by the 1st-century AD Roman poet Martial, who praised its convenient use, the codex achieved numerical parity with the scroll around AD 300, and had completely replaced it throughout the now Christianised Greco-Roman world by the 6th century.

The codex provides considerable advantages over other book formats:

The change from rolls to codices roughly coincides with the transition from papyrus to parchment as the preferred writing material. The codex began to replace the scroll almost as soon as it was invented. In Egypt, by the fifth century, the codex outnumbered the scroll by ten to one based on surviving examples. By the sixth century, the scroll had almost vanished as a medium for literature.

All content from Kiddle encyclopedia articles (including the article images and facts) can be freely used under Attribution-ShareAlike license, unless stated otherwise. Cite this article:
Codex Facts for Kids. Kiddle Encyclopedia.