Book of Esther facts for kids 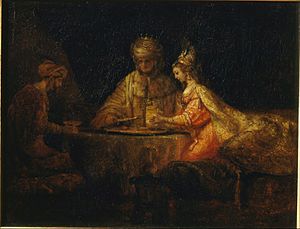 "If it pleases the king...let the king, together with Haman, come today to a banquet I have prepared for him." (Esther 5:4, NIV)

Esther is the name of a book in the Tanakh (the Hebrew Bible) and the Old Testament, and also its title heroine. It is the basis for the Jewish celebration Purim.

Although it is never said who wrote the book of Esther, from inside evidence it is possible to make some guesses about the author and when it was written. The author was a Jew, because he emphasizes where the Jewish festival came from and from the Jewish nationalism inside the story. The author probably lived in a Persian city, because he knew Persian customs well, and does not say anything about the land of Judah or Jerusalem. The earliest date of the book would be a little while after the events were told, for instance, about 460 B.C. (before Ezra's return to Jerusalem). It is also thought that the festival of Purim had been celebrated some time before this book was written.

The author's main purpose was to write about how the yearly festival of Purim started and to make people remember the saving of the Jewish people during King Xerxes' reign. The book shows both the start of the festival and why it should continue to be celebrated.

In the book, the author repeatedly talks about the conflict between Israel and the Amalekites, a conflict that began during the exodus and continued through Israel's history. The author of Esther views them as the symbol of all the powers of the world against God's people. Now that Israel has been released from captivity, Haman's dangerous edict is the final try in the Old Testament time to get rid of them. When Haman is defeated, Israel enjoys a time of rest.

Feasting is another important theme in Esther, as seen in the picture on the left. Banquets are the setting for important parts of the story. There are ten banquets.

Repeating is one of the main features of the style of the book of Esther. The three groups of banquets come in pairs; there are two lists of the king's servants; two reports that Esther hid who she was; two gatherings of women; two houses for the women; two fasts; two talks of Haman with his wife and friends; two sudden visits to the king by Esther; two coverings of Haman's face; two royal commands; two cooling of the king's anger; two days for the Jews to protect themselves and take vengeance; and two letters about how Purim started.

Another important feature of this book that has been often wondered at is that it never directly talks about God, worship, prayer, or sacrifice. This has made some people think the book is not as religious as other books. However, it is possible that the author purposefully did not say anything about God or anything religious to show more clearly that it is God who controls all the "unimportant" coincidences that are in the story and end in saving the Jews.

The Book of Esther is about a Jewish girl, adopted by her uncle Mordecai after her parents had died. Xerxes, the Persian king, who rejected his other wife (Queen Vashti), fell in love with Esther in the beauty contest. He took in Esther as the new Persian Queen, not knowing she was an Israelite.

Meanwhile, Haman, the king's prime minister, creates a grudge against Esther's uncle Mordecai because he does not bow down to him, and only to the God of Israel. He despises Mordecai because he is a Jew, and tries to trick the king into making a law to kill all of the Jews. He, too, does not know that the Queen is a Jew herself.

Later, Queen Esther finds out the plot by Mordecai, and tries to stop it. She goes to the king and invites him to dine with her, and with Haman, so that she may tell him. But when he comes,she loses bravery and does not tell him. Later she invites him and Haman again, and this time she tells him. The king, furious, storms out, and Haman asks Esther for mercy. When the king comes back in, he mistakes Haman for 'molest'ing his Queen, and hangs him on the gallows that Haman had prepared for Mordecai.

Then Mordecai comes into the presence of the king and receives the signet ring of the king. The King then changes the law and saves the Jews because of Esther's pleas.

All content from Kiddle encyclopedia articles (including the article images and facts) can be freely used under Attribution-ShareAlike license, unless stated otherwise. Cite this article:
Book of Esther Facts for Kids. Kiddle Encyclopedia.