Book of Malachi facts for kids 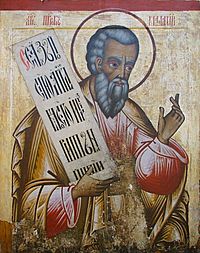 An 18th century Russian icon of the prophet Malachi

The Book of Malachi, is the last of the books of the Old Testament. The book is made up of four chapters and a total of fifty-five verses. The word Malachi means my messenger. We don't know if this is a name or if it describes the work of the writer. There are very few historical details in the Book of Malachi. The best clue as to its dating may be the Persian term for governor (pehâ) is used in Chapter 1 verse 8. This could mean that it was written after the time when the Jews were in Persia. in the same verse, the temple has been rebuilt, the book must also be later than 515 BC. The author of Ecclesiasticus early in the 2nd century BC, used some of the themes in the book of Malachi, so most scholars assign it to a position after Haggai and Zechariah, close to the time of Ezra and when Nehemiah came to Jerusalem in 445 BC. Since the book talks about things that are common in religion, it could have been given at most any time. This leaves some doubt about the date.

The Book Of Malachi uses a method of "question and answer". God says something and the people ask how that can be true. Then God gives the reason for what He has said. Then the next statement, question and answer follow. The questions include: "Does God love us"? and "Why is God angry with us"? God gives a list of wrong things they have done. They have made offerings of second rate things in the temple. Priests have not done their work properly. Men have married women who were not followers of God. They have not been faithful to the wives they have married. They have questioned God's justice and they have not given the tithe to the temple.

The book ends by telling everyone to obey the laws given by Moses and by saying that Elijah will return before the end of time.

Quotes from the Book of Malachi:

Chapter 3, verse 1 is quoted by Jesus in the Gospel of Matthew Chapter 11, verse 10, and said to be about John the Baptist.

Chapter 4, verse 6 is included in a promise given to the father of John the Baptist in the Gospel of Luke Chapter 1 verse 17

Chapter 3, verse 8 has been quoted by many famous preachers to tell people that they should have given money to God and to help other people.

All content from Kiddle encyclopedia articles (including the article images and facts) can be freely used under Attribution-ShareAlike license, unless stated otherwise. Cite this article:
Book of Malachi Facts for Kids. Kiddle Encyclopedia.