He is called Ezra the Scribe (Hebrew: עזרא הסופר, Ezra ha-Sofer) and Ezra the Priest in the Book of Ezra. In an early Greek translation of the bible, the Septuagint, the name is written as Esdras (Greek: Ἔσδρας), from which comes Latin: Esdras. His name may be an abbreviation of Azaryahu, "God-helps".

In Islam he is known as Uzair (Arabic: عزير‎code: ar is deprecated ). He was mentioned in the Qur'an.

The Book of Ezra and Book of Nehemiah are the oldest sources for the history of Ezra,. Many of the other books they say are written by Ezra (First Esdras, 3-6 Ezra) are written after that. Those books take the story from the books of Ezra and Nehemiah.

Ezra was a member of the family of Seraiah the high priest. He lived in Babylon when in the seventh year (~ 457 BCE) of Artaxerxes, king of Persia, the king sent him to Jerusalem to teach the laws of God to any who did not know them.

Ezra led a large group of exiles back to Jerusalem. He discovered that Jewish men had been marrying non-Jewish women. He worked to stop this from happening again.

Some years later the king Artaxerxes sent a Jewish nobleman, Nehemiah, to Jerusalem. He had to rebuild the city walls. Once this was done, Nehemiah asked Ezra to read the Law of Moses (the Torah) to the people. The people and priests agreed to keep to this law and to separate themselves from all other peoples.

The second book of Esdras was written a lot later, c. AD 100. In this book, Ezra talks with an angel or God three times and has four visions. At the end, he is taken up to heaven like Enoch and Elijah. Ezra is seen as a new Moses in this book. 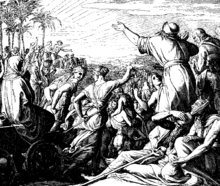 Judaism believes Ezra started the Great Assembly of scholars and prophets. Later, this would become the Sanhedrin, the authority when it comes to religious law.

It is said that Ezra was the writer of the Books of Chronicles.

His tomb at Al-ʻUzair on the banks of the Tigris near Basra, Iraq, is a pilgrimage site for the local Marsh Arabs.

All content from Kiddle encyclopedia articles (including the article images and facts) can be freely used under Attribution-ShareAlike license, unless stated otherwise. Cite this article:
Ezra Facts for Kids. Kiddle Encyclopedia.