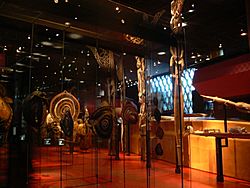 View of its African exhibits

The Musée du quai Branly is a museum in Paris. It is known in English as the Quai Branly Museum, nicknamed MQB. It displays art and culture from indigenous civilisations of Africa, America, Asia and Oceania. Quai Branly opened on 23 June 2006. It holds the collections of the old Musée national des Arts d'Afrique et d'Océanie, which is now closed. It contains 267,000 objects in its permanent collection. Of these, 3500 items are on display.

All content from Kiddle encyclopedia articles (including the article images and facts) can be freely used under Attribution-ShareAlike license, unless stated otherwise. Cite this article:
Quai Branly Museum Facts for Kids. Kiddle Encyclopedia.