Book of Ruth facts for kids 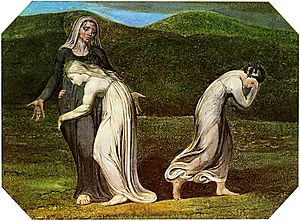 The Book of Ruth (meaning pity or compassion) is the eighth book of the Old Testament (Christian), and the Tanakh (Jewish). It is one of the shortest books in both the Jewish and Christian holy books, consisting of only four chapters. It is unknown who wrote the book. Some think that it was written by Samuel, but there is no evidence for that.

According to many scholars, this book was originally part of the Book of Judges, and was later taken from that book and made independent. It was probably written around 900 BC.

The book tells the story of the family of Elimelech, his wife Naomi, and their sons Mahlon and Chilion. Because of a famine, they were forced to leave Bethlehem and go to the land of Moab. Once there, Elimelech died, and his sons married two Moabite women. Mahlon married Ruth, and Chilion married Orpah. After some time there, Mahlon and Chilion both died. 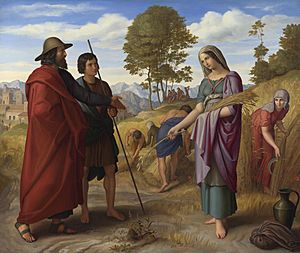 Naomi was forced to return home because her husband and sons were dead. She then told Ruth and Orpah to return home to their families and find new husbands. Orpah returned home but Ruth promised she would follow Naomi wherever she went. Ruth's pledge to Naomi is found in chapter 1 verses 16 and 17. But Ruth said, "Do not press me to leave you or to turn back from following you! Where you go, I will go; where you lodge, I will lodge; your people shall be my people, and your God my God. Where you die, I will die— there will I be buried. May the Lord do thus and so to me, and more as well, if even death parts me from you!" Although originally made by a daughter-in-law to her mother-in-law, a form of this pledge is sometimes included in wedding services.

They returned to their home and Ruth decided she would go into the fields to pick up grain the wealthy people would drop on the ground (a common practice in that time). A kind man named Boaz, who was the owner of the field, noticed her and her beauty. He also learned that she had chosen to follow the God of Israel and that she was caring for her widowed mother-in-law. He told his workers to drop extra grain for her. When she went home to tell her mother-in-law how much she received, they found out that Boaz was a close relative of theirs. Under Jewish law, this gave Ruth the right to marry Boaz, if Boaz bought the land formerly owned by Ruth's husband.

All content from Kiddle encyclopedia articles (including the article images and facts) can be freely used under Attribution-ShareAlike license, unless stated otherwise. Cite this article:
Book of Ruth Facts for Kids. Kiddle Encyclopedia.