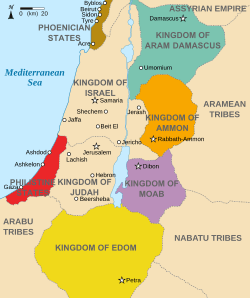 The region around 830 BC. Moab is shown in purple

Moab (not to be confused with Moab, the city in Utah) is the historical name for an area of land in Jordan. The mountainous land covers the eastern shore of the Dead Sea. In ancient times, it was the Kingdom of Möab. There have been many archaeological findings that have helped reconstruct its history. It is also described in the Old Testament of the Bible. According to Genesis (19:37), it was inhabited by the children of Moab, a grandson of Lot. The Moabites were often at war with its neighbours to the west, the Israelites.

The capital of Moab was Dibon.

A well-known Moabite is Ruth. According to the Biblical Book of Ruth, she married an Israelite man and became the greatgrandmother of king David.

All content from Kiddle encyclopedia articles (including the article images and facts) can be freely used under Attribution-ShareAlike license, unless stated otherwise. Cite this article:
Moab Facts for Kids. Kiddle Encyclopedia.