Privas is a commune of France, capital (Prefecture) of the Ardèche department of the Auvergne-Rhône-Alpes region in southeastern France. It is the smallest administrative centre of any department in France.

Today Privas is known for several confectionery made with chestnuts produced in the region, as the marron glacé.

When the department of Ardèche was created on 4 March 1790, the capital was Privas alternating with Annonay, Aubenas, Le Bourg(-Saint-Andéol) and Tournon. In September of that year, Privas became the only capital of the department.

The distances from Privas to other cities are:

Privas is surrounded by the communes:

The Köppen climate classification type for the climate at Largentière is an "Oceanic climate" (also known as Maritime Temperate climate) and of the subtype "Cfb".

The inhabitants of Privas are known, in French, as Privadois (women: Privadoises).

With a population of 8,313, Privas has a population density of 685 inhabitants/km2. It is the prefecture with fewest people living in it.

Evolution of the population in Privas 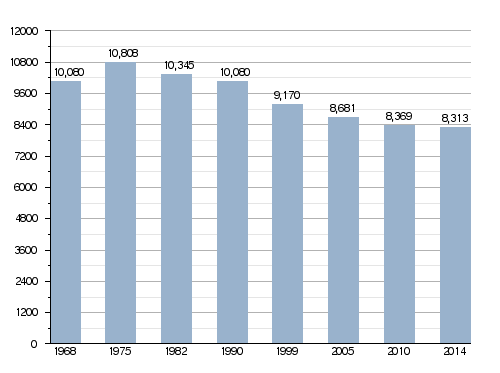 Privas is the prefecture of the Ardèche department since 1800. It is also the capital of the arrondissement of Privas and the administrative centre (French: chef-lieu) of the canton Privas, formed by 15 communes, including Privas, with 20,402 inhabitants (2014).

Privas is twinned with:

All content from Kiddle encyclopedia articles (including the article images and facts) can be freely used under Attribution-ShareAlike license, unless stated otherwise. Cite this article:
Privas Facts for Kids. Kiddle Encyclopedia.