The town grew by becoming an important railway centre. Like many Fenland towns, March was once an island surrounded by marshes. It occupied the second largest "island" in the Great Level. As the land was drained, the town grew and prospered as a trading and religious centre. It was also a minor port before, in more recent times, a market town and an administrative and railway centre. March is situated on the banks of the navigable old course of the River Nene, today mainly used by pleasure boats.

Modern March lies on the course of the Fen Causeway, a Roman road, and there is evidence of Roman settlements in the area.

Before the draining of the fens, March was effectively an island in the marshy fens. It was formed from two settlements, Merche and Mercheford, separated by a canal. The town probably owes its origin to the ford on the old course of the River Nene, where the road between Ely and Wisbech, the two chief towns of the Isle of Ely, crossed the river. At one time shipping on the River Nene provided the basis of the town's trade, but this declined with the coming of the railways in the 19th century.

A single arch bridge was built over the River Nene towards the north end of the town in 1850. High Street, which is the chief thoroughfare, is continued over the bridge to Broad Street on the north side of the Nene, and The Causeway is lined with a fine avenue of elm and other trees.

A Local Board of Health was formed in 1851, under Act 14 and 15 Vict. c. 10, but by the provisions of the Local Government Act 1894 the town became governed by an Urban District Council of 12 members. Gas lighting was provided by the March Gas and Coke Co. Limited. The Wisbech Water Works Company, under a provisional order obtained in 1884, supplied the town with water, which was brought through mains pipes from Wisbech, 10 miles (16 km) away.

The population of the civil parish and urban district in 1891 was 6,988; and ecclesiastical parishes viz:

HM Prison Whitemoor, opened in 1991, lies slightly to the northwest of the town. Whitemoor is a maximum security prison for nearly 500 men in Category A and B. 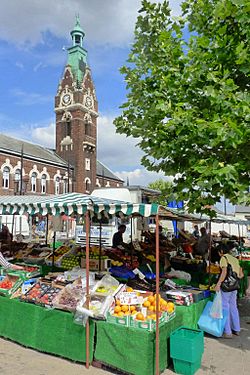 With a long history of trading, in the reign of Elizabeth I, March was a minor port. In 1566 eight boats, capable of carrying one, one and a half, or two cartloads, were used in the coal and grain trades. A certain amount of traffic in coal and other commodities, carried in barges, was observed by Dugdale in 1657. Local tradesmen's tokens of 1669, and a silver shilling token of 1811, have been noted.

Originally a market appears to have been held near the original town (then village) centre, on land beside The Causeway. A Market Cross (now called The Stone Cross) points towards the existence of an early market and this cross was erected in the early 16th century. This site was very near St Wendreda's Church.

In 1669 the town successfully petitioned King Charles II and in 1670 he granted the Lord of the Manor of Doddington a Royal Charter with the right to hold a market with two annual fairs, in spite of the opposition of Wisbech Corporation. This market was held on Fridays. The Lord of the Manor of Doddington, who owned a large part of March, gave special permission to the townspeople to sell their goods on some of his land in the town centre. This site, now called the Market Place, was then known as Bridge Green Common and later named Market Hill.

In 1785 the tolls were assessed at £6 per year. Soon after this the market appears to have lapsed, though the fairs continued to prosper. The development of the market was impeded by the lack of a covered hall and because market day in several neighbouring towns fell on the same day (Friday).

In 1807 the Vestry decided that it was not hygienic for goods to be loaded or unloaded in the vicinity of the market and ordered all saw pits, timber and other encroachments around the Market Place to be removed. The market was struggling during this time and an attempt to revive it in 1821 was not very successful. A Butter Cross, also known as a market house, was erected in 1831. This building also housed the town fire engine and had an upstairs room that for a time housed the Clock House School and later the Town Surveyor's Office. This office was covered by a turret which housed the Town Clock (purchased by public subscription about 1750) and the Fire Bell. In later refurbishments this clock was re-housed in St Peter's Church Tower. The Town Stocks were also placed in the Market Place and local offenders (and those who refused to go to church) were placed in them.

The want of a market house was remedied, in a makeshift fashion, by Sir Henry Peyton (who was the Lord of the Manor of Doddington). His building, however, was only 40 ft long (12 m) by 17 ft broad (5.2 m), and provided only 14 stalls under cover.

After the opening of the railway in 1847 another attempt was made to increase the market. In 1851 the market had been said to be "making progress"; and £150 was subscribed to give a treat to the poor at its reopening. The clash with other market days was solved in December 1856 by changing market day from Friday to Wednesday "by private arrangement and without any formalities". The tolls were, however, collected in an arbitrary and haphazard way; they were assessed for poor rate purposes at £10.

In 1872 the Board of Health bought a Shand and Mason fire engine that was the town's first steam appliance and was housed in the Market House. In the same year the vestry agreed to erect a urinal at the back of the Butter Cross for use by boys attending the Clock House School, but would not erect a water closet (toilet).

The market toll-keeper in 1888, though he had no fixed scale of charges and kept no record of receipts, was said to be taking about £50 a year. The success and prosperity of the market fluctuated over the years and an attempt by the Local Board to purchase the market rights to mark Queen Victoria's Golden Jubilee of 1887 was a failure. However, in 1897 Sir Algernon Peyton agreed to sell the market rights, the Market Place and Market House to March Urban District Council for £800. At that time the market was leased to F. B. Phillips, who agreed to surrender his lease in 1898 subject to receiving the market tolls for one year without charge. 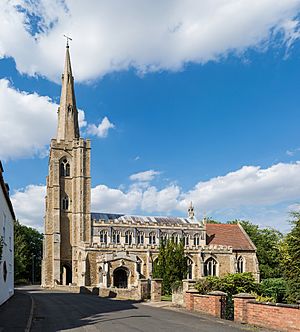 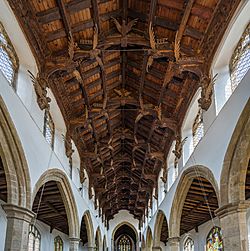 St Wendreda, to whom the church is dedicated, is the town's own saint and March is the only known church dedication to this saint. She was a 7th-century Anglo-Saxon who is supposed to have been a daughter of King Anna of East Anglia (killed 654) one of the first Christian Kings of the kingdom of East Anglia. Two of her sisters, Etheldreda and Sexburgha, who were the abbesses of Ely and Minster-in-Sheppey respectively, are better known saints. She is also associated with Exning, Suffolk.

The saint's relics were enshrined in gold in Ely Cathedral, until in 1016 they were carried off to battle in the hope they would bring victory to Edmund Ironside, the son of King Ethelred. But at the Battle of Ashingdon the army of King Canute captured the relics and he presented them to Canterbury Cathedral. In 1343 the relics were returned to March, but their final resting place is unknown.

The church is known for its magnificent double-hammer beam roof with 120 carved angels; it is regarded as one of the best of its kind.

John Betjeman described the church as "worth cycling 40 miles in a head wind to see".

In Victorian times, other Anglican churches were built in March, nearer to where most of the inhabitants now lived. Thomas Henry Wyatt was responsible for the design of St John's, St Peter's and St Mary's (Westry).

March has its own museum, located down the High Street. It is in the building that was originally the South District Girls school, constructed in the 1850s, it went from school to school, until 1976 when the building was purchased by the Town Council. The Museum was opened in 1977.

It is open every Saturday and Wednesday from 10:30 – 15:30 and contains a vast amount of local memorabilia, both from March, and its surrounding villages. Such artefacts include the clock face from the Church of St Mary, Benwick and a large collection of cameras. 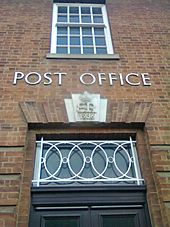 March Royal Mail sorting office (previously a full post office) dates from 1936. It is unusual in that it is one of a handful of post offices that display the royal cypher from the brief reign of Edward VIII.

March has a Non-League football club March Town United F.C. who play at the GER Sports Ground. Their honours are winning the Eastern Counties League in the 1987-88 Season & the United Counties League division 1 winners in the 1953-54 Season. 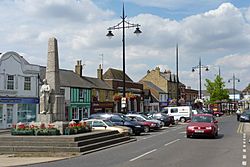 In the town centre there are independent shops and retailers such as W. H. Smith, Boyes, Boots, Sainsbury's, M&Co and Superdrug. Out-of-town development has taken place. In 2008 Meadowland retail park opened with an Argos Superstore, Mattressman, Carpetright, Halfords and The Original Factory Shop. Tesco also extended their store to a significantly larger store next to B & M.

The town centre has several bars and restaurants. In 2008, the Barracuda Group changed the landmark Ye Olde Griffin Hotel into a "Smith & Jones" branded pub it is now back to being branded as The Ye Olde Griffin Hotel. It is now (2019) part of the Stonegate pubs chain. In March 2011 J D Wetherspoon opened a pub in the former Hippodrome cinema and bingo hall.

The town's major employers are Whitemoor Prison, Tesco and Sainsbury's, and the many food processing factories in the area.

The town is on either side of the River Nene (Old Course). A narrow boat marina provides berths and boats for hire.

The town now has a western bypass to take the A141 and some of the traffic away from the town centre. The B1099 and B1101 pass through the town.

The town was an important railway centre, with a major junction between the Great Eastern Railway and Great Northern Railway at March railway station. The station is 87 mi (140 km) from London by rail, 32 mi (51 km) north of Cambridge, 16 mi (26 km) north west of Ely and 9 mi (14 km) south of Wisbech.

Whitemoor marshalling yards, built in the 1920s and 30s, were once the second largest in Europe, and the largest in Britain. They were gradually phased out during the 1960s and shut down in 1990. HM Prison Whitemoor was built on part of the site. The natural regeneration of the remaining 44 hectares resulted in its classification as a potential country park. In addition, a new housing development was constructed adjacent to the site. However, in 2002, Network Rail identified a need for a supply depot and redeveloped part of the site.

The tracks of the March to Wisbech line remain and currently (2019) a review is taking place to assess reopening the Bramley Line. The line has been identified as a priority for reopening by the Campaign for Better Transport. 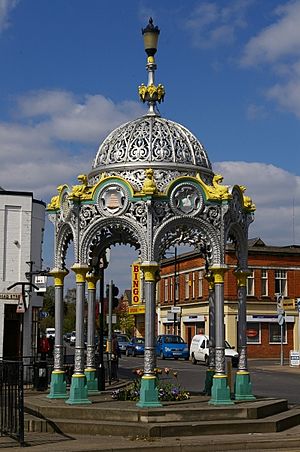 All content from Kiddle encyclopedia articles (including the article images and facts) can be freely used under Attribution-ShareAlike license, unless stated otherwise. Cite this article:
March, Cambridgeshire Facts for Kids. Kiddle Encyclopedia.