Wisbech (/ˈwɪzbiːtʃ/) is a market town, inland port and civil parish in the Fens of Cambridgeshire, England. It has a population of 31,573. The tidal River Nene runs through the centre of the town and is spanned by two bridges. The name is believed to mean on the back of the (River) Ouse, Ouse being a common Celtic word relating to "water" and the name of a river that once flowed through the town. Since 2011 Wisbech has become the second largest town in Cambridgeshire (after St Neots; Before the Local Government Act 1972 came into force in 1974 Wisbech was a municipal borough.

During the Iron Age, the area where Wisbech would develop lay in the west of the Brythonic Iceni tribe's territory. Like the rest of Cambridgeshire, Wisbech was part of the kingdom of East Anglia after the Anglo-Saxon invasion.

The first authentic reference to Wisbech occurs c. 1000, when Oswy and Leoflede, on the admission of their son Aelfwin as a monk, gave the vill to the monastery of Ely. (J. Bentham, Hist. Ely, 87). In 1086 Wisbech was held by the abbot, there may have been some 65 to 70 families, or about 300 to 350 persons, in Wisbech manor. It must be remembered, however, that Wisbech, which is the only one of the Marshland vills of the Isle to be mentioned in the Domesday book, probably comprised the whole area from Tydd Gote down to the far end of Upwell at Welney.

Wisbech Castle was built by William I to fortify the town, and during the reign of Elizabeth, James I and Charles I became a state ecclesiastical prison, incarcerating Catholics, many of whom died there of insanitary conditions. Among those held there were John Feckenham, the last Abbot of Westminster, and later two of the key participants in the Gunpowder Plot, Robert Catesby and Francis Tresham. The castle was rebuilt in the mid-17th century, and again in 1816 by Joseph Medworth, who also developed The Crescent, familiar as the setting in numerous costume dramas. 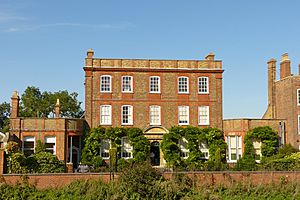 Peckover House on North Brink by the Nene in Wisbech.

Peckover House, with its fine walled garden, was built for the Quaker banking family in 1722 and now owned by the National Trust. Formerly known as Bank House, the Peckover Bank later became part of Barclays Bank.

In the 17th century, the local inhabitants became known as the "Fen Tigers" because of their resistance to the draining of the fens, but the project turned Wisbech into a wealthy port handling agricultural produce. At this time Wisbech was on the estuary of the River Great Ouse, but silting caused the coastline to move north, and the River Nene was diverted to serve the town. The Wisbech Canal joining the River Nene at Wisbech was subsequently filled in and became the dual carriageway leading into the town from the east (now crossing the bypass).

On 21 September 1979, two Harrier jump jets on a training exercise collided over Wisbech; one landed in a field and the other in a residential area. Two houses and a bungalow were demolished on Ramnoth Road, causing the death of Bob Bowers, his two-year-old son Jonathan Bowers and former town mayor Bill Trumpess.

The port now houses a large number of berths for yachts adjacent to the Boathouse development.

On 19 January 2012, BBC Look East reported that there were growing tensions in the town where one-third of the population are East European migrants.

The town's market days are Thursday and Saturday. 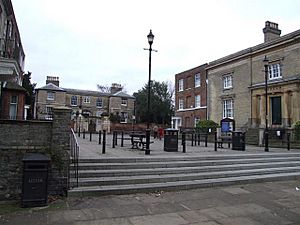 The Angles Theatre is a thriving professional theatre, run almost entirely by volunteers and backed by many leading names including Derek Jacobi, Jo Brand and Cameron Mackintosh.

The amateur dramatic group the Wisbech Players has been performing for over 50 years. They currently perform twice a year in spring and autumn at the Angles Theatre.

Amateur dramatic group the Wisbech Amateur Operatic and Dramatic Society (WAODS) have been providing musicals to the town since 1905 and a yearly pantomime since 1975. The society's home is at the local Thomas Clarkson Community College, where rehearsals and performances take place.

Every summer a "Rose Fair" is held in aid of St Peter's Church. The church is decorated with floral displays sponsored by local organisations and businesses. A parade of floats forms up in Queens Road and circuits the town. Strawberry and cream teas are served and stalls raise funds for local charities. Coaches bring visitors from a wide area. Details are available from the local tourist office.

The Luxe cinema in Alexandra Rd screens films in a former WI hall.

Wisbech is twinned with Arles in France. 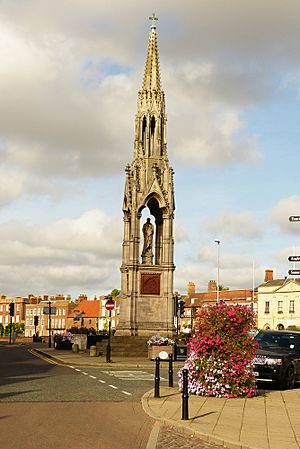 the Clarkson Memorial in Wisbech 2013

The Octagon Chapel in Wisbech Old Market, demolished in 1952.

Like the rest of the United Kingdom, it experiences an oceanic climate but Cambridgeshire is one of the driest counties in the British Isles along with Essex. February is the driest month, whilst October is the wettest. In temperature terms, both January and December are the coldest months, whilst August is the warmest.

All content from Kiddle encyclopedia articles (including the article images and facts) can be freely used under Attribution-ShareAlike license, unless stated otherwise. Cite this article:
Wisbech Facts for Kids. Kiddle Encyclopedia.