Kids Encyclopedia Facts
This page is about the city. For the diocese, see Diocese of St David's. For the shopping centre in Cardiff, see St David's, Cardiff. For the village in Canada, see St. Davids, Niagara Regional Municipality, Ontario.

St Davids or St David's (Welsh: Tyddewi lit. "David's house”) is a city and a community (named St Davids and the Cathedral Close) with a cathedral in Pembrokeshire, Wales, lying on the River Alun. It is the resting place of Saint David, Wales's patron saint, and named after him. St Davids is the United Kingdom's smallest city in population (just over 1,600 in 2011) and urban area (the smallest city by local authority boundary area being the City of London). St Davids was given city status in the 12th century. This does not derive automatically from criteria, but in England and Wales it was traditionally given to cathedral towns under practices laid down in the early 1540s, when Henry VIII founded dioceses. City status was withdrawn in 1886, but restored in 1994 at the request of Queen Elizabeth II. St Davids is also known archaically by the name Meneva or Menevia (Welsh: Mynyw).

Tradition states that David was born to Saint Non at what is now St Non's, just to the south of the city, in about AD 500. It is said that he was baptised at Porthclais, now the city's port, and was brought up by his mother at Llanon. St David may also have been educated at Ty Gwyn, Whitesands, by St Paulinus.

In the 6th century, David founded a monastery and church at Glyn Rhosyn (Rose Vale) on the banks of the River Alun. The area was originally known in the Welsh language as Mynyw and to the Romans as Meneva or Menevia. The monastic brotherhood that David founded was very strict — besides praying and celebrating masses, they cultivated the land and carried out many crafts, including beekeeping, in order to feed themselves and the many pilgrims and travellers who needed lodgings. They also fed and clothed the poor and needy. The settlement that grew up around the monastery was called Tyddewi meaning "David's house". In 519 the archbishopric of Caerleon in the county of Monmouth was transferred to Mynyw, which was renamed "St Davids" in honour of the archbishop and saint by whom the transfer was accomplished. The original cathedral built on the site was often plundered by the Vikings and was finally burnt and destroyed in 1087. The present cathedral was built by the Normans and contained many relics, including the remains of St David. It was visited by many pilgrims, many of whom were nobles and kings, including William the Conqueror in 1077, Henry II in 1171, and Edward I and Queen Eleanor in 1284. Pope Calixtus II decreed that two pilgrimages to St Davids were equivalent to one to Rome ("Roma semel quantum dat bis Menevia tantum"). Because of this, a vast income was raised from visiting pilgrims in the Middle Ages. Pilgrimages later fell out of favour due to practices such as the selling of indulgences, and the income from them faded away.

By the 19th century the city of St Davids was isolated and neglected, and was described as follows in the Penny Cyclopaedia:

At present its appearance is that of a poor village, the houses, excepting those of the clergy, being in a ruinous state. The locality is lonely, and the neighbouring district wild and unimproved; but it is still an interesting place as the seat of a large episcopal see, with a fine cathedral and the remains of other magnificent religious edifices.

Since then, better transport and the advent of tourism have helped the city prosper again. 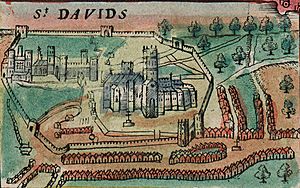 St Davids depicted on a 1610 map of Wales 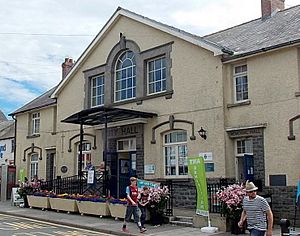 In the 16th century a town was recognised as a city by the English Crown if it had a diocesan cathedral within its limits, but this link was abolished in 1888 and St Davids lost the right to call itself a city. In 1991 St Davids town council proposed that a case for city status, which the residents had long considered it to have anyway, should be promoted in connection with the 40th anniversary of the coronation of Queen Elizabeth II, and in 1992 the Home Office agreed to refer the matter to Buckingham Palace. In 1994, at the request of the Queen, St Davids was again granted city status along with the Northern Irish town of Armagh, "In recognition of their important Christian heritage and their status as cities in the last century". The letters patent conferring city status were formally presented by the Queen in a ceremony at St David's Cathedral on 1 June 1995.

Next to the cathedral, the 13th-century Bishop's Palace is a ruin maintained by Cadw and open to visitors. St Davids was once a marcher borough, within which lay the hundred of Dewisland. In 1603 the antiquarian George Owen described it as one of five Pembrokeshire boroughs overseen by a portreeve.

In addition to the cathedral, notable features of the city include the 14th-century Tower Gate, the Celtic Old Cross and a number of art galleries. St Davids is also a base for walking and water sports. It has several hotels, a pharmacy, shops and galleries, and a youth hostel, and a number of pubs. The entire coastline around St Davids forms part of the Pembrokeshire Coast National Park.

St Davids lifeboat, located at St Justinian, has saved an estimated 360 people since the first lifeboat was located there in 1869; and four lifeboatmen have died while saving others. The Irish Sea area includes a large number of offshore rocks and islands, and is notorious for strong tides.

The city hosted the National Eisteddfod in 2002. The Archbishop-designate of Canterbury, Dr Rowan Williams, was inducted into the Gorsedd of Bards, a historic order of Druids.

The St Davids Penknife Club is a group of people dedicated to voluntary fund raising for local groups and charities.

Whitesands Bay, about two miles west of St. Davids, is a popular watersports resort. It has been described as the best surfing beach in Pembrokeshire and one of the best tourist beaches in the world.

St Davids is twinned with:

The following were born in St Davids:

All content from Kiddle encyclopedia articles (including the article images and facts) can be freely used under Attribution-ShareAlike license, unless stated otherwise. Cite this article:
St Davids Facts for Kids. Kiddle Encyclopedia.