Aurangabad is a city in the Indian state of Maharashtra. It is the administrative headquarters of Aurangabad district and is the largest city in the Marathwada region. Located on a hilly upland terrain in the Deccan Traps, Aurangabad is the fourth-most populous urban area in Maharashtra with a population of 1,175,116. The city is known as a major production center of cotton textile and artistic silk fabrics. Several prominent educational institutions, including Dr. Babasaheb Ambedkar Marathwada University, are located in the city. The city is also a popular tourism hub, with tourist destinations like the Ajanta and Ellora caves lying on its outskirts, both of which have been designated as UNESCO World Heritage Sites since 1983. Other tourist attractions include the Aurangabad Caves, Daulatabad Fort, Grishneshwar Temple, Jama Mosque, Bibi Ka Maqbara, Himayat Bagh, Panchakki and Salim Ali Lake. Historically, there were 52 Gates in Aurangabad, some of them extant, because of which Aurangabad is nicknamed as the "City of Gates". In 2019, the Aurangabad Industrial City (AURIC) became the first greenfield industrial smart city of India under the country's flagship Smart Cities Mission.

Paithan, the imperial capital of the Satavahana dynasty (1st century BCE–2nd century CE), as well as Daulatabad or Dēvagirī, the capital of the Yadava dynasty (9th century CE–14th century CE), are located within the limits of modern Aurangabad. In 1308, the region was annexed by the Delhi Sultanate during the rule of Sultan Alauddin Khalji. In 1327, the capital of the Delhi Sultanate was shifted from Delhi to Daulatabad (in present-day Aurangabad) during the rule of Sultan Muhammad bin Tughluq, who ordered a mass migration of Delhi's population to Daulatabad. However, Muhammad bin Tughluq reversed his decision in 1334 and the capital was shifted back to Delhi. In 1499, Daulatabad became a part of the Ahmadnagar Sultanate. In 1610, a new city named Khaḍkī was established at the location of modern Aurangabad to serve as the capital of the Ahmadnagar Sultanate by the Ethiopian military leader Malik Ambar, who was brought to India as a slave but rose to become a popular Prime Minister of the Ahmadnagar Sultanate. Malik Ambar was succeeded by his son Fateh Khan, who changed the name of the city to Fatehnagar. In 1636, Aurangzeb, who was then the Mughal viceroy of the Deccan region, annexed the city into the Mughal Empire. In 1653, Aurangzeb renamed the city as "Aurangabad" and made it the capital of the Deccan region of the Mughal Empire. In 1724, the Mughal governor of the Deccan, Nizam Asaf Jah I, seceded from the Mughal Empire and founded his own Asaf Jahi dynasty. The dynasty established the State of Hyderabad with their capital initially at Aurangabad, until they transferred their capital to the city of Hyderabad in 1763. Hyderabad State became a princely state during the British Raj, and remained so for 150 years (1798–1948). Until 1956, Aurangabad remained part of Hyderabad State. In 1960, Aurangabad and the larger Marathi-speaking Marathwada region became a part of the state of Maharashtra. 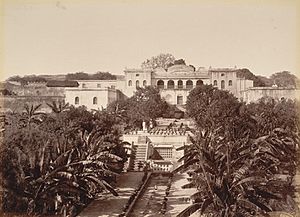 Khaḍkī was the original name of the village which was made a capital city by Malik Ambar, the Prime Minister of Murtaza Nizam Shah II, Sultan of Ahmednagar. Within a decade, Khaḍkī grew into a populous and imposing city. Malik Ambar died in 1626. He was succeeded by his son Fateh Khan, who changed the name of Khaḍkī to Fatehnagar. With the capture of Daulatabad Fort by the imperial troops in 1633, the Nizam Shahi dominions, including Fatehnagar, came under the possession of the Mughals.

In 1653 when Mughal prince Aurangzeb was appointed the Viceroy of the Deccan for the second time, he made Fatehnagar his capital and renamed it Aurangabad. Aurangabad is sometimes referred to as Khujista Bunyad by the Chroniclers of Aurangzeb's reign.

In 1724, Asaf Jah, a Turkic general and Nizam al-Mulk of the Mughals in the Deccan region, decided to secede from the crumbling Mughal Empire, with the intention of founding his own dynasty in the Deccan and decided to make Aurangabad his capital. His son and successor, Nizam Ali Khan Asaf Jah II transferred his capital from Aurangabad to Hyderabad in 1763. In 1795, the city came under the Maratha rule, following the Maratha victory in the Battle of Kharda, along with an indemnity of 30 million rupees paid by Ali Khan Asaf Jah II, Nizam of Hyderabad to the Marathas. However, Maratha rule lasted only eight years before the city came under the rule of the Nizam of Hyderabad, under the protection of the British East India Company, following the British victory in the Second Anglo-Maratha War. During the period of the British Raj, the city was known as Aurungábád.

Aurangabad features a semiarid climate under the Köppen climate classification.

Annual mean temperatures range from 17 to 33 °C, with the most comfortable time to visit in the winter – October to February. The highest maximum temperature ever recorded was 46 °C (114 °F) on 25 May 1905. The lowest recorded temperature was 2 °C (36 °F) on 2 February 1911. In the cold season, the district is sometimes affected by cold waves in association with the eastward passage of western disturbances across north India, when the minimum temperature may drop down to about 2 °C to 4 °C (35.6 °F to 39.2 °F). 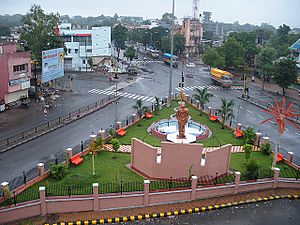 The entire area is covered by the Deccan Traps lava flows of Upper Cretaceous to Lower Eocene age. The lava flows are overlain by thin alluvial deposits along the Kham and Sukhana river. The basaltic lava flows belonging to the Deccan Trap is the only major geological formation occurring in Aurangabad. The lava flows are horizontal and each flow has two distinct units. The upper layers consist of vesiculara and amygdaloidal zeolitic basalt while the bottom layer consists of massive basalt. The lava flows are individually different in their ability to receive as well as hold water in storage and to transmit it. The difference in the productivity of groundwater in various flows arises as a result of their inherent physical properties such as porosity and permeability. The groundwater occurs under water table conditions and is mainly controlled by the extent of its secondary porosity i.e. thickness of weathered rocks and spacing of joints and fractures. The highly weathered vesicular trap and underlying weathered jointed and fractured massive trap constitutes the main water-yielding zones. The soil is mostly formed from igneous rocks and is black, medium black, shallow and calcareous types having different depths and profiles.

Marathi is the official language of the city. Marathi is also the most commonly spoken language in the city, followed by Hindi.

The majority of the population in Aurangabad are Hindus (51%), followed by 31% Muslims, 15.2% Buddhists and 1.6% Jains. There are a substantial number of adherents of Sikhism and Christianity in the city. 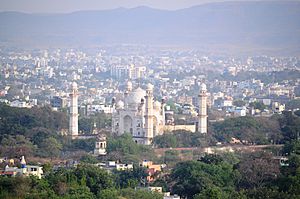 Aurangabad is considered to be a classic example of efforts of state government towards balanced industrialisation of state. The city was a major silk and cotton textile production center. A fine blend of silk with locally grown cotton was developed as Himroo textile. Paithani silk saris are also made in Aurangabad. With the opening of the Hyderabad-Godavari Valley Railways in the year 1900 several ginning factories were started. After 1960, Maharashtra Industrial Development Corporation (MIDC) began acquiring land and setting up industrial estates. The Maharashtra Center For Entrepreneurship Development's main office is in Aurangabad.

Aurangabad is surrounded by the industrial areas (MIDCs) of Chikhalthana, Shendra and Waluj MIDC. A new industrial belt namely Shendra - Bidkin Industrial Park is being developed under DMIC.

The city is divided in 115 electoral wards called as Prabhag, and each ward is represented by a Corporator elected by the people from each ward. There are two Committees, General Body and Standing Committee headed by the Mayor and the chairman respectively. AMC is responsible for providing basic amenities like drinking water, drainage facility, road, street lights, healthcare facilities, primary schools, etc. AMC collects its revenue from the urban taxes which are imposed on citizens. The administration is headed by the Municipal Commissioner; an IAS Officer, assisted by the other officers of different departments.

Aurangabad Airport is an airport serving the city and has connecting flights to Hyderabad, Delhi, Mumbai, Bangalore, Ahmedabad, Udaipur, Tirupati, Visakhapatnam and Thiruvananthapuram. In 2008, flights were made available to the people travelling to the Hajj pilgrimage.

Aurangabad railway station is the major railway station under Nanded railway division of the South Central Railway zone. It is located on the Secunderabad-Manmad section and has rail connectivity with major cities such as Hyderabad, Delhi, Nizamabad, Nagpur, Nashik, Pune, Nanded and Latur Road. 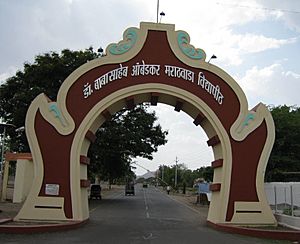 Maulana Azad College of Arts and Science was founded in 1963 by Rafiq Zakaria, who formed a trust called Maulana Azad Education Society to manage the affairs. The College is affiliated to Dr. Babasaheb Ambedkar Marathwada University of Aurangabad.

Aurangabad has schools run by the Aurangabad Municipal Corporation (AMC) and private schools owned and run by trusts and individuals. Government Polytechnic Aurangabad is one of the polytechnic institutions in Marathwada region.

Institute of Hotel Management, Aurangabad, is affiliated to University of Huddersfield. Students have internships in the Vivanta, Taj in Aurangabad.

In 1903, a treaty was signed between British and the Nizam to train the Nizam's Army and it was decided to establish a proper cantonment. Today the cantonment is spread across 2,584 acres (10.46 km2) with civil population of 19,274 as per 2001 census.

Aurangabad is a historical city along with its surrounding towns and villages. 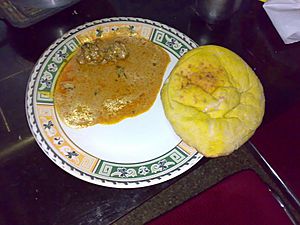 All content from Kiddle encyclopedia articles (including the article images and facts) can be freely used under Attribution-ShareAlike license, unless stated otherwise. Cite this article:
Aurangabad Facts for Kids. Kiddle Encyclopedia.