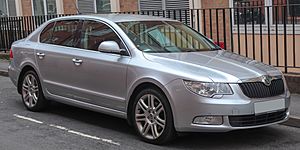 Škoda Auto is one of the largest car makers in Central Europe. In 2010, 762,500 cars were sold worldwide. This was a record for the company.

Škoda Works was started as a firearms maker in 1859.

Škoda Auto goes back to the early 1890s as a company which started out making bicycles. In 1894, 26-year old Václav Klement (a bookseller in Mladá Boleslav) could not find any spare parts to fix his bicycle. Klement returned his bicycle to the makers, Seidel and Naumann, with a letter. It was written in Czech. The letter asked the company to repair the bicycle. When Klement got his reply, it was in German. It said (in English): "If you would like an answer to your inquiry, you should try writing in a language we can understand". Klement was very unhappy at this. Even though he did not have any experience, he decided to start a bicycle repair shop. He and Václav Laurin opened this in 1895 in Mladá Boleslav. Before working with Klement, Laurin was a bicycle maker in the town of Turnov. Turnov was near to Mladá Boleslav. In 1898, after moving to their newly-built factory, the pair bought a Werner "motorcyclist". It was made by French manufacturer Werner Brothers. Laurin & Klement's first motorcyclette was powered by an engine on the handlebars. It drove the front wheels. It was dangerous and unreliable. Laurin had an accident on it, and lost one of his front teeth. To design a safer motorcycle, the pair wrote to German specialist Robert Bosch for advice. The pair's new motorcycle went on sale in 1899.

In 1900, when the company had 32 people working for them, motorcycles began being exported. 150 machines were shipped to London. Shortly after, the press said that they were the makers of the first motorcycle. The first model, Voiturette A, was a success. The company was set up both within Austria-Hungary and all over the world. By 1905 the company was making automobiles. 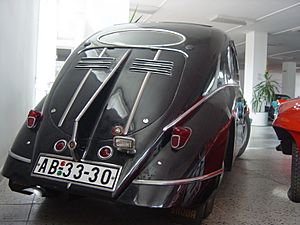 The back of a Škoda Popular Special on display at the Sportauto Museum, Lány, Kladno District, Czech Republic

After World War I, the Laurin-Klement company began making trucks. However, in 1924, the company looked for a partner after running into problems. It was bought by Škoda Works, a firearms maker. Most things made later were under the Škoda name. Škoda was successful again after an economic depression. The Popular in the late 1930s is an example of a popular car.

During World War II, when Nazi Germany had invaded Czechoslovakia, the Škoda works was turned into part of Reichswerke Hermann Göring. It helped the German war effort.

This table shows the Škoda car models still being made.

All content from Kiddle encyclopedia articles (including the article images and facts) can be freely used under Attribution-ShareAlike license, unless stated otherwise. Cite this article:
Škoda Auto Facts for Kids. Kiddle Encyclopedia.