Christ Church, Hampstead, is a Church of England church in Hampstead, London. It is a church with particular connections to the old village of Hampstead and the Heath.

The present church was erected between 1850 and 1852 to designs by the architect Samuel Daukes in the Early English Gothic style. In 1860 a timber gallery was erected by Sir Gilbert Scott (this was dismantled in the 1960s). In 1881–82 the north porch and aisle were added to designs by Ewan Christian. The church is constructed of Kentish ragstone with Portland stone dressings and slate roofs.

In 1855 the church built a primary school adjacent, originally for infants. By the post-World War II period the school catered to kindergarten (ages 3 – 5) and primary (ages 5 – 11) mixed gender students, organized as one class per year. This was one of many such church-associated schools in the area. 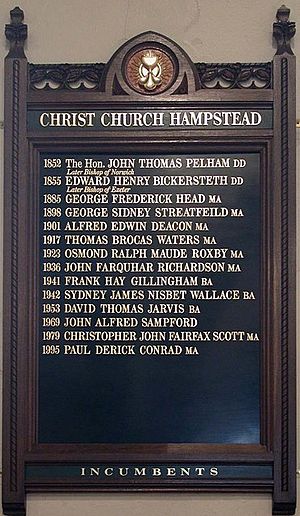 The church has a ring of eight bells, the heaviest of which weighs in at 24cwt. They were installed in 2005 after Michael Royalton-Kisch, the current tower captain, single-handedly raised £100,000 to replace the old, unsafe bells. The current band practices on a Wednesday evening at 7pm, and rings for most Sunday services.

The treble, tenor, third and fifth bells were the work of Gillett & Johnston, adopted from St Luke's in Cowley, Oxford. The remaining four bells were cast by Whitechapel Bell Foundry in 2005. 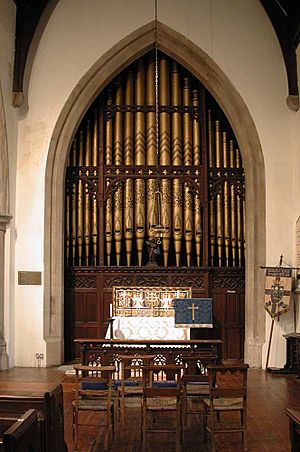 The church had an organ installed in 1857 by the celebrated builder Henry Willis who also became the church's first organist. The organ has since been replaced. In about 1968 dry rot was found directly above the organ and to repair the damage the organ had to be partly dismantled. It was stored in the church but was never re-assembled. At some point after this it was taken away and stored (possibly by the organ builders Mander). After some trials of the Allen computer organ, a smaller 2 manual tracker action instrument was installed at the rear of the church. The BBC visited the church and chose to broadcast their Morning Service soon after, however the Willis organ that they heard on their 'scouting' visit had been dismantled by the time they came to broadcast live.

There have been a number of famous organists including:

All content from Kiddle encyclopedia articles (including the article images and facts) can be freely used under Attribution-ShareAlike license, unless stated otherwise. Cite this article:
Christ Church, Hampstead Facts for Kids. Kiddle Encyclopedia.