Christian Klien (born 7 February 1983) is an Austrian Formula One racing driver. In total he has scored 14 points in Formula One.

Klien currently drives for NewBlood By Morand Racing in the ELMS, while also serving in the Austrian Armed Forces. 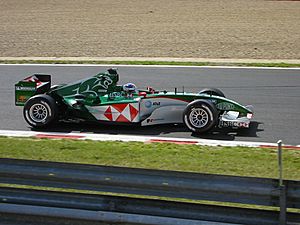 Klien driving for Jaguar at the 2004 Belgian Grand Prix.

Klien started his motorsport career in his early teens. He raced in karting championships in both Austria and Switzerland. He moved up to Formula BMW. He won several titles in lower Formula series. Klien moved into Formula One in 2004. He drove for the Jaguar Racing team, alongside Mark Webber. At the end of 2004, Jaguar sold its Formula One team to Red Bull. The team was renamed Red Bull Racing. Klien shared a race seat with Italian Vitantonio Liuzzi. He stayed at Red Bull for 2006 season.

In 2010, Klien moved to become the test driver for HRT. For the Singapore Grand Prix Kling replaced Sakon Yamamoto. HRT reported that Yamamoto was sick from food posining. For the Brazilian Grand Prix, HRT announced that Klien would race in place of Yamamoto. No reason was given.

All content from Kiddle encyclopedia articles (including the article images and facts) can be freely used under Attribution-ShareAlike license, unless stated otherwise. Cite this article:
Christian Klien Facts for Kids. Kiddle Encyclopedia.