Kazuki Nakajima(born January 11, 1985}} is a Japanese professional athlete. He is best known as a Formula One racing driver. He drove for the Williams-Toyota team from 2007 to 2009. Prior to that he had been their test driver. He has also competed in the GP2 Series for the DAMS team.

Nakajima was born in Okazaki, Aichi, Japan. He is the son of the retired Formula One driver Satoru Nakajima. His younger brother, Daisuke, is also a racing driver. 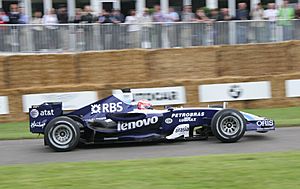 Nakajima started his career in racing in 1996, when he started karting. His father had been backed by Toyota's arch-rivals Honda through his career. Nakajima hoped that by joining Toyota he would shield himself against any claims that his father had promoted his career.

Nakajima moved to the Formula Three Euroseries in 2006. He finished seventh with 36 points. 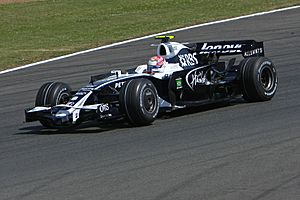 Nakajima driving for Williams at the 2008 British Grand Prix

In November 2006, Nakajima was named a Williams test driver for the 2007 season. Nakajima's debut in a Formula One car came at Fuji Speedway during November 2006, where he completed four demonstration laps in wet conditions.

Nakajima raced in the GP2 series in 2007 for the DAMS team. Nakajima also served as Williams' test driver, completing 7,000 km of testing for the team.

Nakajima's first year in GP2 finished with no wins, but five consecutive podiums and ended the year as top rookie. 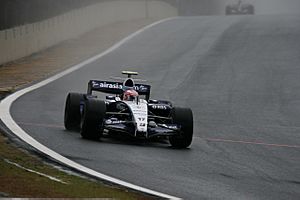 It was announced on 9 October 2007 that following the retirement of Alexander Wurz, Nakajima would race for Williams in the season finale in 2007 Brazilian Grand Prix. Nakajima finished tenth in the race. He set the fifth fastest lap – quicker than his team-mate Nico Rosberg, who finished fourth.

On 7 November it was confirmed by Williams that Nakajima would partner Rosberg at the Williams team for the 2008 season. He had a successful start to 2008 at the Australian Grand Prix. He finishing seventh but promoted to sixth after Rubens Barrichello was disqualified. He then finished seventh in the Spanish Grand Prix. Nakajima scored two points at Monaco. He was the first Japanese Formula One driver to scored a point at Monaco. Nakajima scored again at the British Grand Prix. In Singapore, Nakajima made it to the third qualifying round for the first time. He qualifyed 10th and finish eighth and scored a point.

Nakajima driving for Williams at the 2009 Belgian Grand Prix

Nakajima was retained by Williams for the 2009 season. At the Australian Grand Prix he crashed into the wall at turn six, putting him out of the race. At the British Grand Prix, Nakajima qualifying in an fifth place, his highest starting spot. Nakajima finished the season without scoring a single point.

Williams signed Rubens Barrichello and Nico Hülkenberg for 2010, leaving Nakajima without a seat. Stefan GP announced on 19 February 2010 that Nakajima was one of the team's drivers. Strefan GP was built from the remains of the Toyota F1 team. Toyota had withdrawn from F1 in late 2009.

All content from Kiddle encyclopedia articles (including the article images and facts) can be freely used under Attribution-ShareAlike license, unless stated otherwise. Cite this article:
Kazuki Nakajima Facts for Kids. Kiddle Encyclopedia.