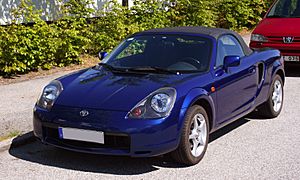 The Toyota MR2 and MR2 Spyder were sports cars made by Toyota. They were sold from 1984 until 2007. The MR2 is a mid-engine sports car, similar to cars by Ferrari and Porsche. MR2 is an acronym for midship, rear-wheel-drive, two-seater.

All content from Kiddle encyclopedia articles (including the article images and facts) can be freely used under Attribution-ShareAlike license, unless stated otherwise. Cite this article:
Toyota MR2 Facts for Kids. Kiddle Encyclopedia.