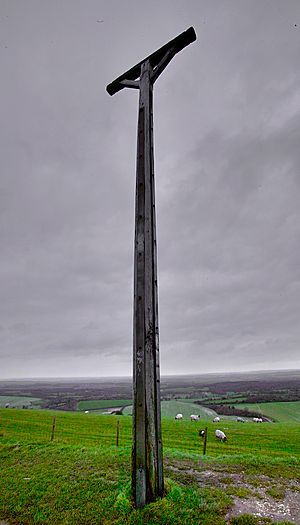 Combe Gibbet is a gibbet at the top of Gallows Down, near the village and just within the civil parish of Combe in Berkshire (formerly Hampshire).

The gibbet is located at , on the Test Way close to the Berkshire-Hampshire border, it is named after the village of Combe, but it is also close to Inkpen. The nearest sizeable town is Newbury in Berkshire. It is built on top of a long barrow known as the Inkpen long barrow. The long barrow is 60 m long and 22 m wide. Walbury Hill (the highest point in South East England) is just a little further to the east.

It was erected in 1676 for the purpose of showing the bodies of George Broomham and Dorothy Newman and has only ever been used for them. The gibbet was placed in such a prominent location as a warning, to deter others from committing crimes.

Broomham and Newman were hanged for murdering Broomham's wife Martha, and their son Robert. Unfortunately the murder was witnessed by "Mad Thomas", who managed to convey what he had seen to the authorities.

A replica gibbet marks the site. The original was destroyed many years ago and subsequent replicas have been replaced several times.

Nowadays it is a popular local tourist attraction with good views of the surrounding area. It is also popular with hang gliders and paragliders.

The Combe Gibbet is also the start of a scenic 16-mile (26 km) off-road race to Overton organised by the Overton Harriers and Athletic Club. The race, which is typically in late March / early April of each year, is one of the few true off-road point to point running races in the UK, coaches taking competitors to the start.

The "Combe Gibbet" Race takes in the highest hill in the South East of England; Walbury Hill, the highest in Hampshire; Pilot Hill as well as Ladle Hill and the edge of Watership Down before entering Overton the source of the River Test.

All content from Kiddle encyclopedia articles (including the article images and facts) can be freely used under Attribution-ShareAlike license, unless stated otherwise. Cite this article:
Combe Gibbet Facts for Kids. Kiddle Encyclopedia.